Rachel Lagarde can’t help but feel detached from most of her belongings. When Hurricane Katrina pummeled the Gulf Coast in August 2005, her family’s two-story house in Plaquemines Parish took on six feet of water. According to her insurance company, it was a complete loss. They filed a claim, gutted it, and rebuilt. Then, in 2012, Hurricane Isaac’s 21-foot surge barreled inland, and it was all lost again to 12 feet of water. Lagarde, a divorced, single mother of two daughters, slowly started to piece the house back together.

“I no longer have a sentimental attachment to anything. I’m numb,” Lagarde said. Now, when she hears news about a new storm developing in the Gulf of Mexico, “we literally just pack our favorite clothes and our documents and put just a few pictures upstairs, and that’s it. I refuse to buy stuff nowadays where I’m like, ‘Oh, I want this forever.’”

After Isaac, Lagarde realized that if she wanted to avoid another flooded home, she needed to elevate the house by building a platform underneath. Most homes in the area are elevated roughly eight feet off the ground or more. She qualified for a $150,000 grant through a hazard mitigation program in Plaquemines Parish funded by the Federal Emergency Management Agency, or FEMA, and said parish officials told her to get a quote from contractors on what it would cost to elevate.

All three quotes were at least $350,000, not including cement for the foundation and driveways, porches, electrical, plumbing, or air conditioning. Parish officials initially told her she could apply for other grants to cover the extra costs, but those grants never came available, Lagarde said. Seven years later, she was still waiting; her remaining options were to pay $200,000 out of pocket to elevate her home, or apply for a separate homeowner rehabilitation grant from the parish. Those funds are allocated through the U.S. Department of Housing and Urban Development, or HUD, a grant program that targets low to moderate income households for disaster relief. Lagarde’s application was later denied. Parish officials told her more money for the program was never allocated from the federal government.

A rejection would “would have been because they didn’t meet some criteria,” said Plaquemines Parish grant administrator Hilda Lott. For example, she added, both programs disqualify applications when homeowners are unable to provide a receipt how they spent the grant money.

Even when they’re accepted, the process is long. “You may be awarded a grant and it may take two, three, four years before you actually get that,” she said.

Now, in the thick of the 2020 Atlantic hurricane season — which has already seen nine named storms — Lagarde’s home still sits on the same parcel of land, at roughly seven feet above sea level. The 5,100 square-foot farmhouse-style home has been remodeled, including four bedrooms, three bathrooms, a two-car garage, and brick-covered backyard patio. If elevated on stilts, it would resemble a castle in the sky overlooking Belle Chase’s mixed-income Braithwaite Park neighborhood.

Public disaster relief aid programs help homeowners pay to elevate their homes, repair them, or buy them out. In lieu of funding, people like Lagarde can afford to repair them — but lower income folks often don’t have that choice. With the coronavirus pandemic hurting local economies, and climate change effects like extreme weather and flooding more common, experts and residents are uncertain how long this process can keep up — especially as state and local governments that rely on tax revenue struggle to stretch funding gaps.

The rebuilding routine after a natural disaster had finally taken its toll on Lagarde. She’s decided she’s had enough. She recently put the house on the market for $350,000 — $25,000 below what her real estate agents advised. She has her doubts about whether anyone would actually invest in the home knowing the risks. “If I could raise it, I’d live there forever,” she said.

A 2018 study by Climate Central and real estate website Zillow found that more than 802,000 homes in the U.S. — worth $451 billion — will be at risk of natural disasters by 2050. Seven of the study’s top 10 states with vulnerable homes are in homes they count as the South, including the Carolinas, Maryland, Florida, Texas, Louisiana, and Virginia.

Louisiana’s 50-year, $50 billion Coastal Master Plan will help restore and buffer the state’s shoreline, in part to help prevent more damage to many communities who have made their home on the coast. But while massive projects are in the works over the coming decades, many people need funding and resources to survive storms or common flood events — especially low-income people. More than 15% of Plaquemines Parish’s residents live in poverty, according to U.S. Census data.

There is no requirement in Louisiana for people to elevate their homes, though federal guidelines may be higher for certain areas, like Plaquemines Parish. It also doesn’t always work: Hurricane Ike in 2008 destroyed at least 85% of elevated cabins across Texas’ Bolivar Peninsula. Buyouts are an increasingly used option, but many homeowners and local officials consider them a last resort due to costliness and citizens’ resistance to leaving their homes. There are also ongoing relocation programs in south Louisiana for at-risk communities like the Isle de Jean Charles Band of the Biloxi Chitimacha Choctaw Tribe, who have lost 98% of their island since 1955.

The state has already lost more than 2,000 acres of its coast from land erosion since 1932, and stands to lose more than twice that amount by the end of the century without a long-term fix. Plaquemines Parish is one of the fastest eroding: Up to half of its land has disappeared over the past 80 years. And people are leaving in droves. From 2000 to 2010, the small fishing community of Venice near the Mississippi River, about an hour south from Lagarde’s home, lost roughly half of its population. After Hurricane Isaac, only about 40% of the population returned to rebuild.

This makes rebuilds and adaptation challenging. When a federally declared disaster strikes Louisiana, federal funding is made available through the state’s hazard mitigation grant program. Jeffrey Giering, an assistant section chief for Louisiana’s mitigation grant program said that typically, within six months to a year, a dollar amount for the grant program is decided upon and allocated, and parishes decide on which projects to pursue, like home elevations, levee size increases, or other storm barriers.

Federal funds pay for 75% of the total value of those projects, according to Giering. In 2017, Louisiana officials committed $92 million to another 50-year, federally-funded effort aimed at helping prepare coastal communities for relocation. The program was designed specifically for Plaquemines Parish and its five neighboring parishes along the coast. For FEMA to fund a project in most cases, Giering said, the recipient, or the parish, must demonstrate that they are able to provide the remaining 25%. The “[federal] funding levels depend upon the community and the past damages to structures,” he said.

The parish typically pays for this with state money or its own budget. Most partially fund disaster recovery through property taxes and oil and gas severance taxes, which are taxes on materials extracted from the ground that are used to fund local services and projects. But the COVID-19 pandemic and the ensuing oil market crash has strained this system. Dozens of oil and gas companies have laid off workers and filed for bankruptcy. A recent survey by the Louisiana Oil and Gas Association found that the industry has been forced to lay off 23% of its workforce in the state. Plaquemines Parish owns roughly 100,000 acres of land in the Gulf of Mexico, which parish officials lease to companies drilling for oil. They’re facing a roughly $7 million shortfall this year, said Thomas Serpas, the parish’s finance manager.

If a jurisdiction can’t provide the match, Giering said, FEMA won’t approve the federal funding. The process to figure out these details is often painstakingly slow, with only a handful going at any given time.

Meanwhile, insurance companies are raising alarms about worsening risks. In a 2017 report, the bond credit rating company Moody’s said that if localities and states don’t cope with climate change risks, they may default on their credit ratings for state and municipal bonds. About two-thirds of U.S. infrastructure projects are funded using municipal bonds, according to Pew Charitable Trusts. New Orleans, for example, received a climate-related credit downgrade after Hurricane Katrina, but was later upgraded when the city eventually rebuilt and rebounded.

If a locality doesn’t have the funds necessary to rebound, such as Plaquemines Parish, insurance rates will rise, and people and companies will leave. Mark Davis, the founding director of Tulane University’s Institute on Water Resources and Policy, said “there are places where people will not be able to live, and people will not be able to work,” and Plaquemines Parish is one of those teetering on the brink.

“The cards say it won't be there. Certainly not as we have known it 100 years from now,” he said. “Functionally, it may not be there 50 years from now. If you get the right storm this summer, it could be gone.”

Darilyn Turner lives in Plaquemines Parish, in the town of Phoenix. Although her home is situated about 40 miles south from Lagarde’s, and their annual incomes are on opposite ends of the middle-class spectrum, their situations are similar: Both women are open to paying at least some portion of the costs to elevate their homes, as long as it’s within reason. Turner’s neighborhood is near communities that have qualified –– in some cases, no more than 20 miles from her home –– but were spared by Isaac. She knows they might not be as lucky when the next storm blows ashore. Turner said she attempted to reach out to parish officials about home elevation funds, but she’s yet to receive a response.

“It’s always on our minds,” she said.

Experts like Davis are concerned about the people, like Turner and Lagarde, who will be left behind as some areas are bought out, employers leave, or people move away.

“I think we're watching an unraveling of the social and economic fabric that has made up these communities, all of which were assuming that the natural environment would somehow be there to serve us,” he said. “And it won't be.” 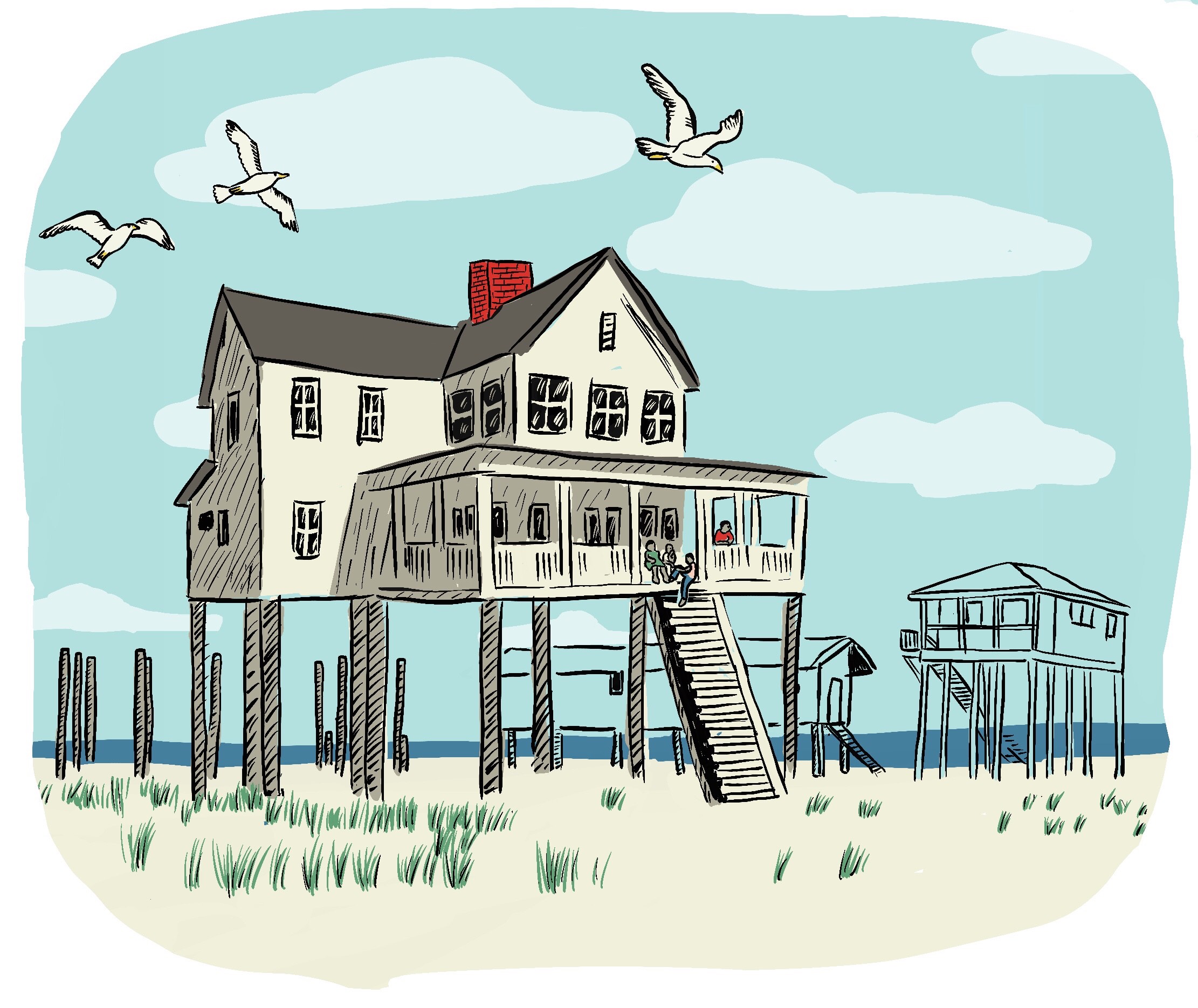