In the spring of 2019, a team of students at the Buell Center working on the "Architecture and Engineering Services" initiative sought to better understand the major players, financing, and timelines of specific architectural projects that were significantly affected by Hurricane Katrina. And for each of them, while many questions were answered, many more emerged—illustrating both the potentials and difficulties of tracing the financial, technical, and political paths of power through the built environment. The below research, by Alicia French (GSAPP MArch '19), takes a close look at the transformation of the city's hospital system through the lens of University Medical Center New Orleans, connecting forced displacement and public investment under the ever-privatizing aegis of 'public' health.

On August 29, 2005, Hurricane Katrina struck New Orleans and its environs, precipitating a flooding catastrophe that devastated the region. During the event, most of the city's hospitals were evacuated and were either permanently closed or acquired by larger private corporate entities (such as Ochsner Health Services, which operates multiple hospitals and clinics in the New Orleans area). Before Katrina, in addition to the VA, New Orleans housed two public hospitals with storied histories: University Hospital and Charity Hospital. After Katrina, both hospitals’ operations would be subsumed into the LSU Interim hospital; in 2013 this hospital was leased by LCMC Health, a medical nonprofit fashioned from the leadership of two other New-Orleans based hospitals, a move which left the New Orleans region with zero remaining public hospitals. LCMC Health eventually opened University Medical Center New Orleans (UMCNO), a private non-profit hospital, largely with state and FEMA money.

LCMC Health - Louisiana Children’s Medical Center Health, a private nonprofit group formed from the leadership of multiple NO area hospitals
Former Governor Bobby Jindal -  Major political supporter of UMCNO, the decision to massively privatize health care across the state largely attributed to his politics
LSU Hospitals -  Louisiana State University has operated a number of medical facilities since the mid-1990s, most used as teaching hospitals, throughout the state. They ran Charity and University Hospitals and currently run the state-of-the-art University Medical Center New Orleans.
LSU Real Estate & Facilities Foundation - Body of LSU responsible for developing and maintaining facilities as well as planning new ones: they were involved in both the planning of UMCNO and the current redevelopment of Charity Hospital.
Foundation for Historical Louisiana - major critic of UMCNO, led an attempt to save historic structures in the neighborhood. Raised $600k for architecture firm RMJM Hillier to conduct an independent study of the damage to Charity Hospital (they ultimately found it suitable for renovation).1
Beverly Construction- Louisiana-based company, contractor for earthwork and utilities (paid $25 million)
Skanska/MAPP - General Contractors for UMCNO
NBBJ / Blitch Knevel Architects - Architects
AECOM - (formerly URS, Structural, MEP, and Civil) consultants, engineering

Other, speculatively identified, non-coded “A&E Services” are shown in italics.

August 29, 2005
Katrina strikes, and University and Charity hospitals, both public, are damaged in the storm (but not irreparably).

2006
238110–238990: Specialty Trade Contractors
Competing claims to the level of wind and flooding damage at Charity Hospital are made, with each party hiring its own team to conduct a facilities assessment of the site and develop an estimate of repair costs. The LSU estimate triggers the 50 percent threshold for repair versus replacement: if a repair costs more than 50 percent of the replacement value of the facility, a replacement is favored by FEMA. Meanwhile, estimates from both FEMA and the Foundation for Historical Louisiana (and the firm they hire, RMJM Hillier) indicate that a repair or even a complete retrofit would be the more cost-effective choice.4   In the end, however, the new facility did not cost the estimated $395 million, but rather $1.2 billion for the massive, state-of-the-art University Medical Center New Orleans.5

2009
233320: Building, Developing, and General Contracting
State announces its intent to demolish this particular section of Mid-City. A freeze on new permits is now in place.6

January 22, 2009
At the same time that LSU is testifying before the legislature in Baton Rouge and listing the project’s shared services, a Section 106 public meeting is being held in New Orleans, where the designs show no shared services.7

November 2009
The City agrees to acquire thirty-four acres between Galvez and Rocheblave for the VA hospital and University Medical Center New Orleans. Use of eminent domain is planned.8

2010
541320: Landscape Architectural Services
Some design modifications—like more green space in the medical campus—is agreed to after the public is critical of the development.9 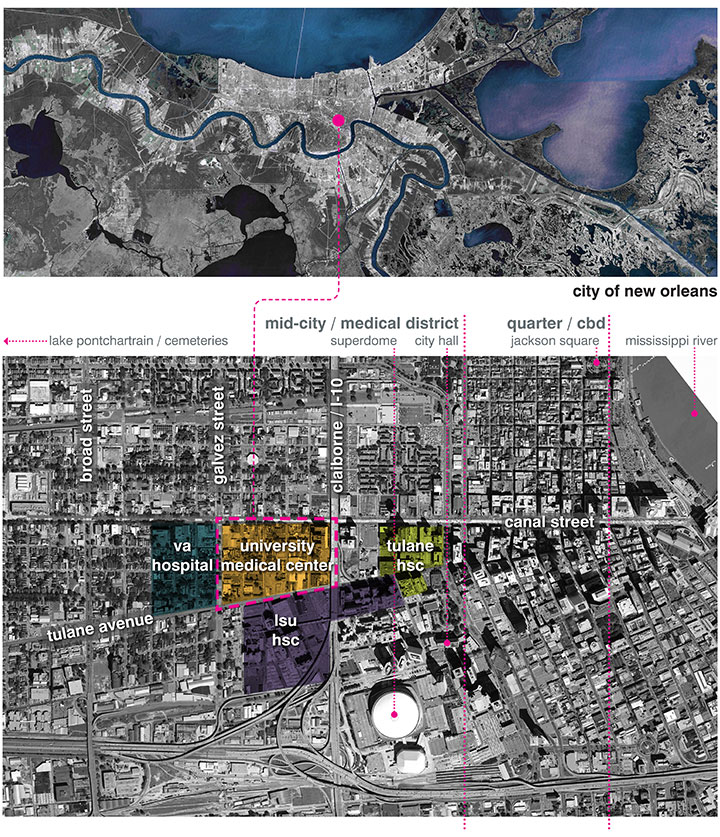 Summer 2010
A $3.2 million program to move as many as 100 homes from the planned VA hospital footprint, adjacent to the UMC site, is initiated.10

May 22, 2011
There is still no agreed-upon business plan for UMCNO. The state expects to spend $100 million annually to support the facility, up from the initial projection, which was around $70 million.12

2012
Multiple entities file suit against the state for undervaluing their property when using eminent domain.13

2013
238110–238990: Specialty Trade Contractors
The State of Louisiana and LCMC Health enter into an official, no-bid contract to provide a "charity hospital" for the state.14

2014
A federal investigation of the UMCNO rental fee begins after the Centers for Medicare and Medicaid Services allege that the LCMC paid the state an inflated amount for the lease of the original LSU hospital while counting on more Medicaid payments once the hospital opened.15

September 1, 2015
236210, 236220: Industrial Building Construction
The New Orleans area lost more jobs than any other urban area in the country from July 2014 to July 2015. With the end of construction on UMCNO, the last of the large post-Katrina construction jobs comes to a close.18

February 2016
UMCNO faces a $44 million budget cut and bands together with other hospitals to consider walking away from their agreement with the state.20

2018
541360: Geophysical Surveying and Mapping Services
541310: Architectural Services
LSU currently managing a “comprehensive land use study” on Charity Hospital. Studio O of San Francisco was hired for the project's design + consulting. The redevelopment is expected to cost between $260 and $285 million dollars. 22

April 16, 2018
Charity Hospital is back out for bids, with an RFP being circulated.23 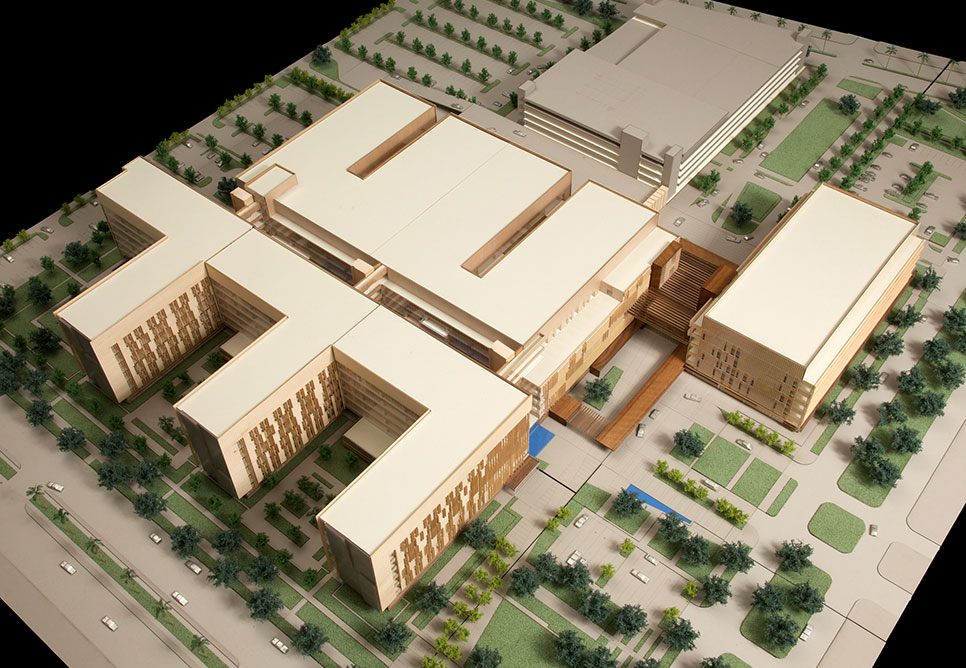 Model of the UMCNO Center (NBBJ) 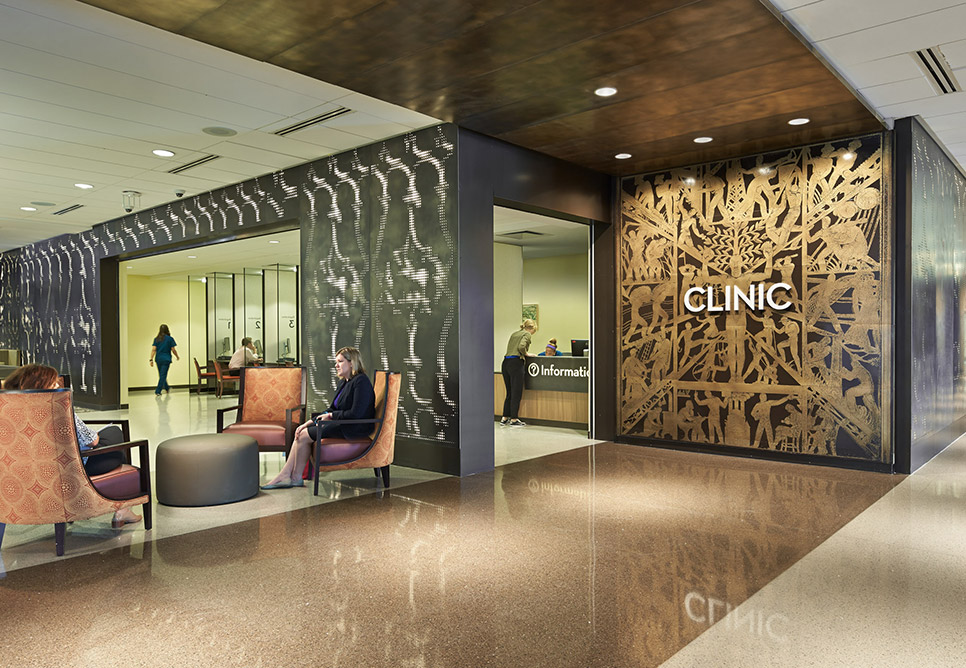 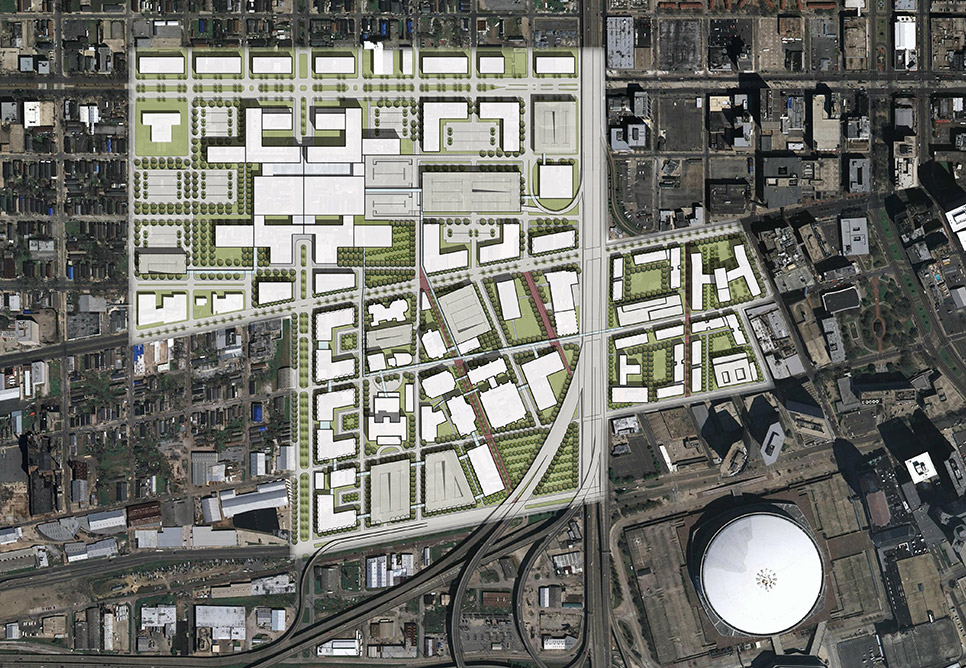 Master plan of UMCNO and the VA hospital combined