Professional Schools of the Built Environment: A 2020 Snapshot

Over the Summer of 2020, nine graduate research assistants at Columbia University’s Temple Hoyne Buell Center for the Study of American Architecture compiled and reviewed information on academic programs from professional schools of the built environment. Collectively, these researchers reviewed 218 higher education institutions across the United States which grant accredited and non-accredited degrees and certificates within the disciplines of architecture, landscape, planning, interior design, preservation, and building and construction management. Acknowledging that these degrees account for only a portion of the curricula through which students are today educated to understand and intervene in the built environment, what follows is an incomplete but nevertheless illuminating snapshot of the interconnected disciplines in the United States today—as the Buell Center looks ahead to how such programs might change during a “Green Reconstruction.”

Regionally, the South has the highest number of universities offering the most degrees, followed by the Northeast, the Midwest, and finally the West and Puerto Rico. The schools studied tended to be in US counties with higher-than-average population density and educational attainment, as well as a lower-than-average white population, as compared to all counties in the United States.

The schools studied also tended to be in counties with a lower anticipated impact from climate change, as measured by the Climate Impact Lab’s map of anticipated mortality costs. While this is not a perfect measure, it offers a very high-level view of the context in which schools of the built environment train future professionals. 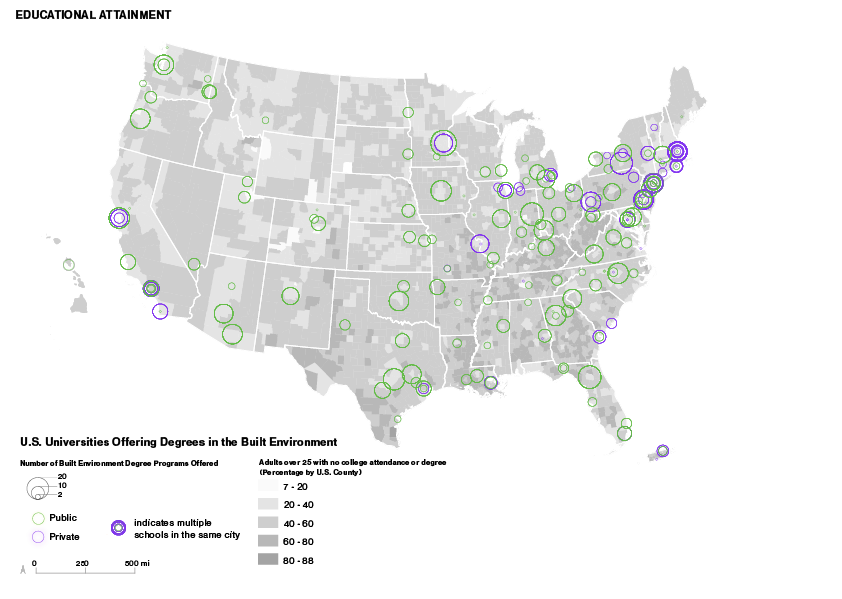 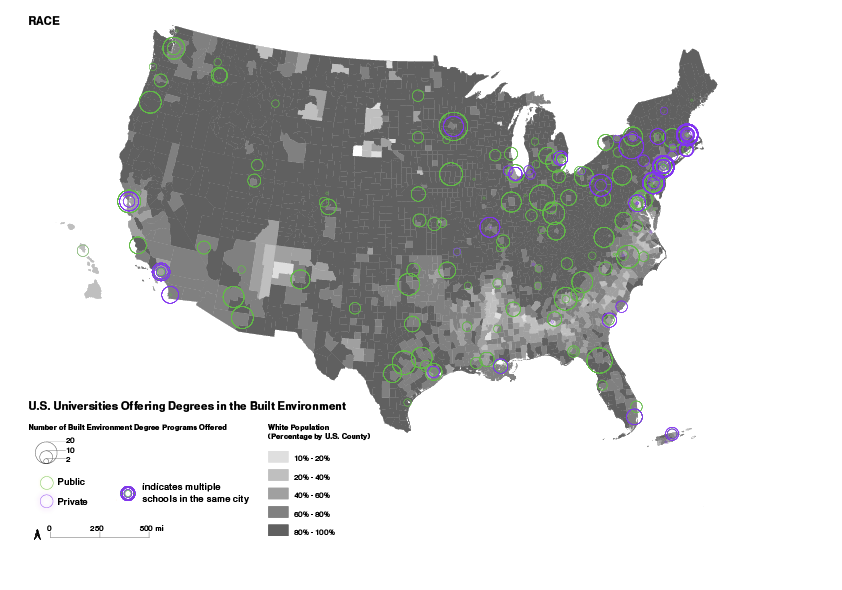 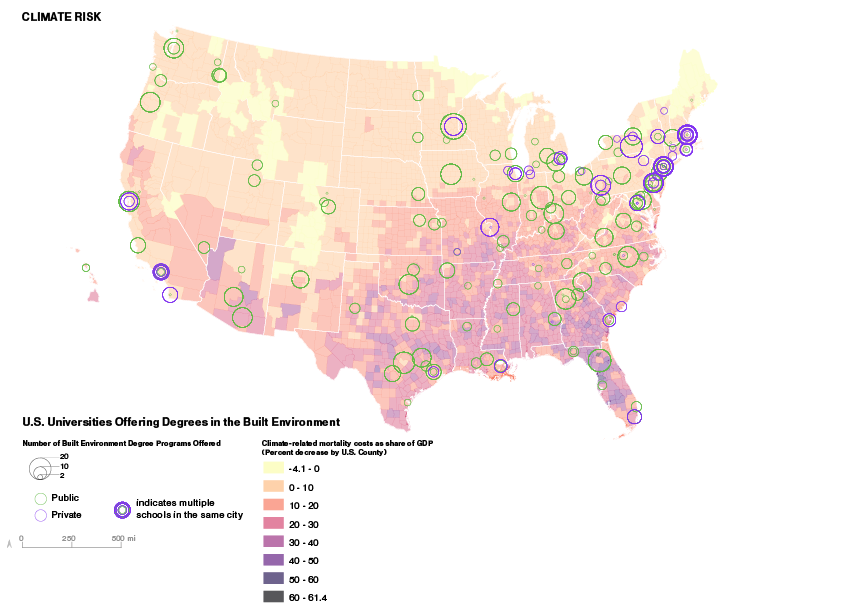 Starting with lists of programs accredited by the National Architectural Accrediting Board (NAAB), the Landscape Architectural Accrediting Board (LAAB), the Council for Interior Design Accreditation (CIDA) and the Planning Accreditation Board (PAB), graduate research assistants gathered information on 1132 degree programs, including all programs taught within the same department as the degree programs listed with the accrediting organization. This allowed for gathering information not only on professional degrees, but also on degrees offered in complement with accredited programs, and on dual degree and certificates.

Researchers were also able to augment the information they collected with overall information about the universities, including average undergraduate tuition costs, which was used as a proxy measure to compare the costs of the degrees studied.

The “other” category includes a variety of degree programs offered alongside the accredited degrees we studied, including Construction and Engineering, Historic Preservation, Urban Design, Sustainability and Sustainable Design, Real Estate Development, and more. This category makes up 27% of all degrees studied, and 30% of degrees in private universities. 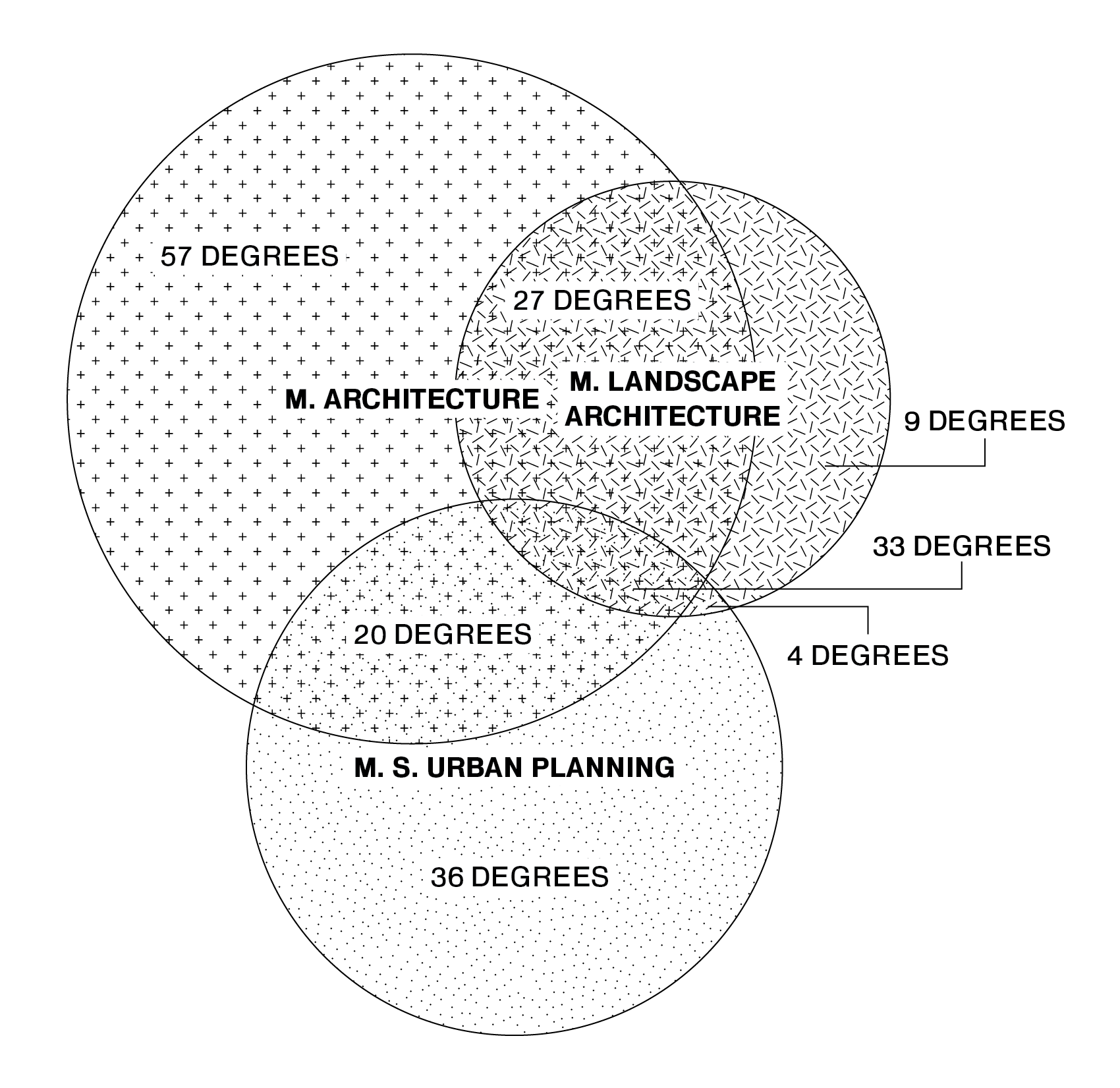 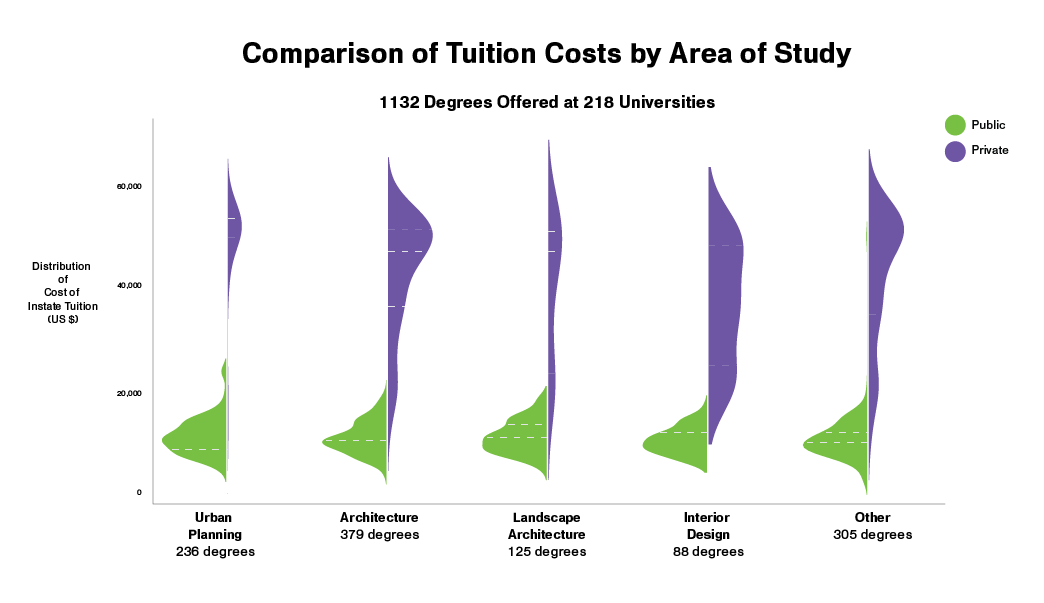 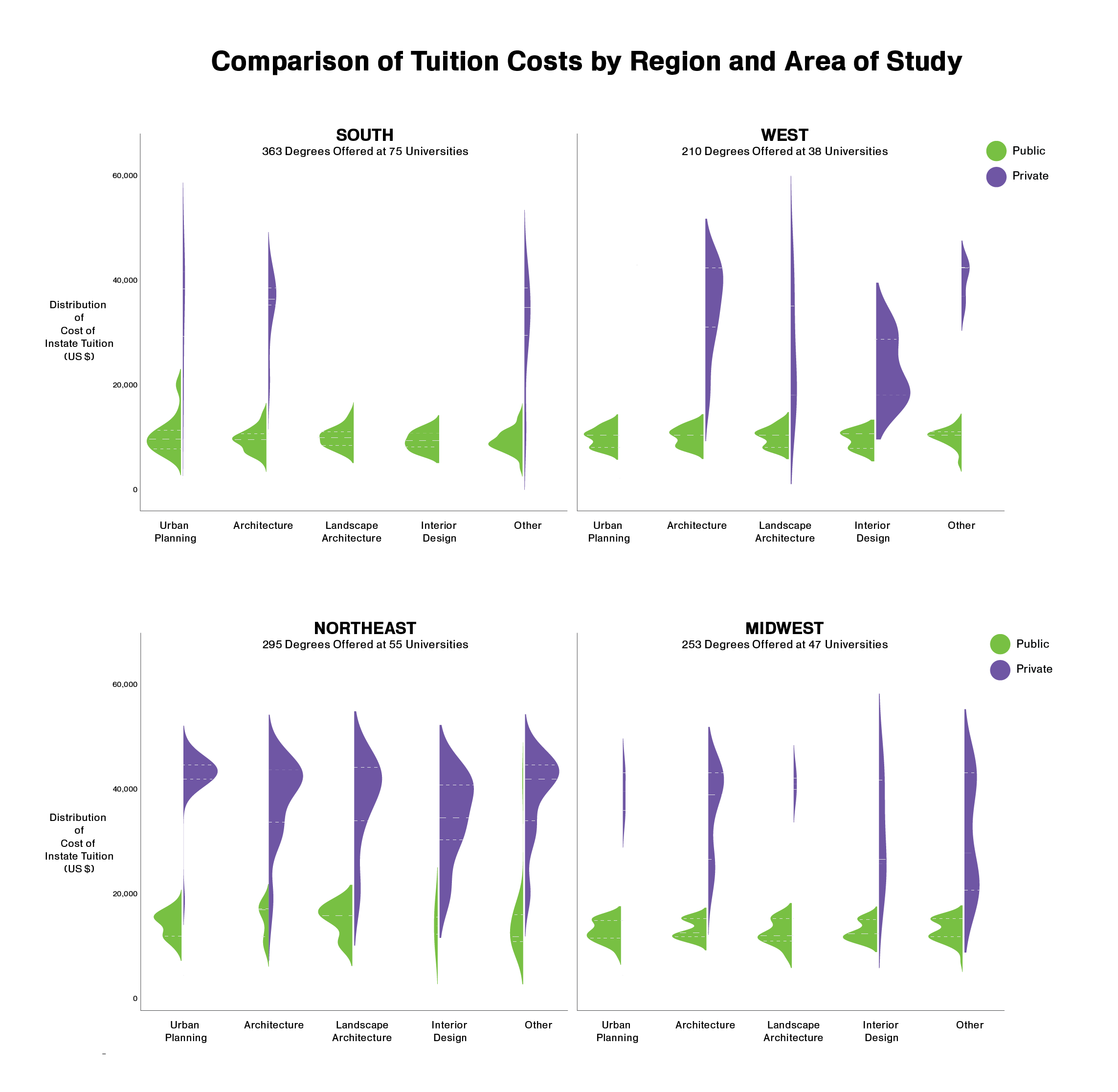 To make sense of these patterns in a statistically significant way and to compare them to patterns across all universities in the United States will require more research and analysis.

Dual Degrees
Only 13% of the degree programs evaluated offered dual degrees, although that number increases to 17% when examining only degrees offered at private universities. Of the Urban Planning degree programs, only 24% offered a dual degree option, as did 17% of the Landscape Architecture programs, 15% of the Architecture programs, 16% of other programs, but only 2% of the Interior Design programs. Urban Planning programs were more likely to offer a dual degree with programs outside of studies of the Built Environment, like Business, Law, Public Health, and Social Work.

While the patterns revealed in this dataset offer a preliminary glance into the state of built environment education, its possible applications are far more wide ranging. It’s difficult to draw evidence-based conclusions about the values of pedagogy across such a diverse body of schools and programs without the introduction of additional variables. We hope that this foundation will lead to a more textured understanding of these fields, and of the institutions that introduce new practitioners to them. 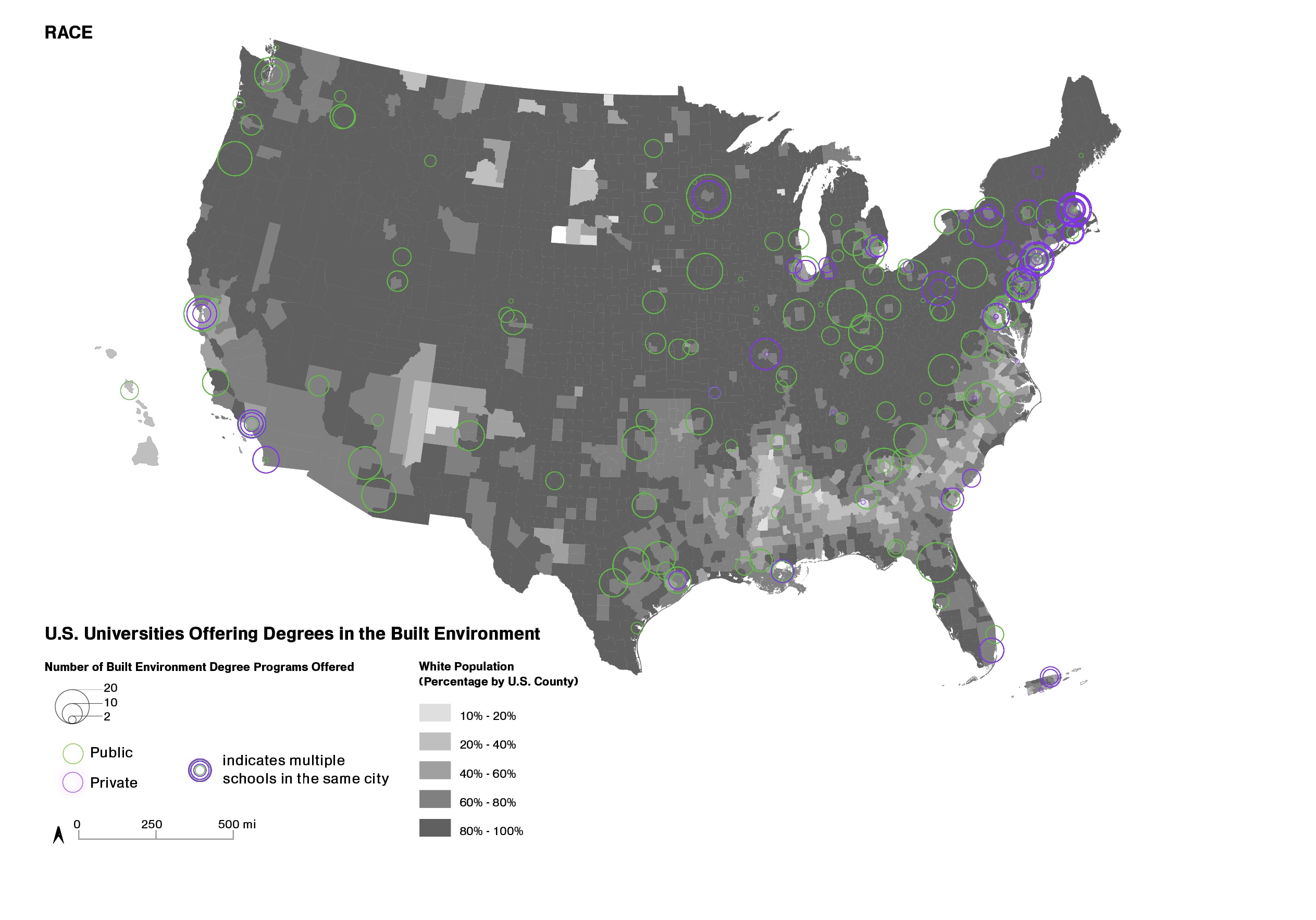 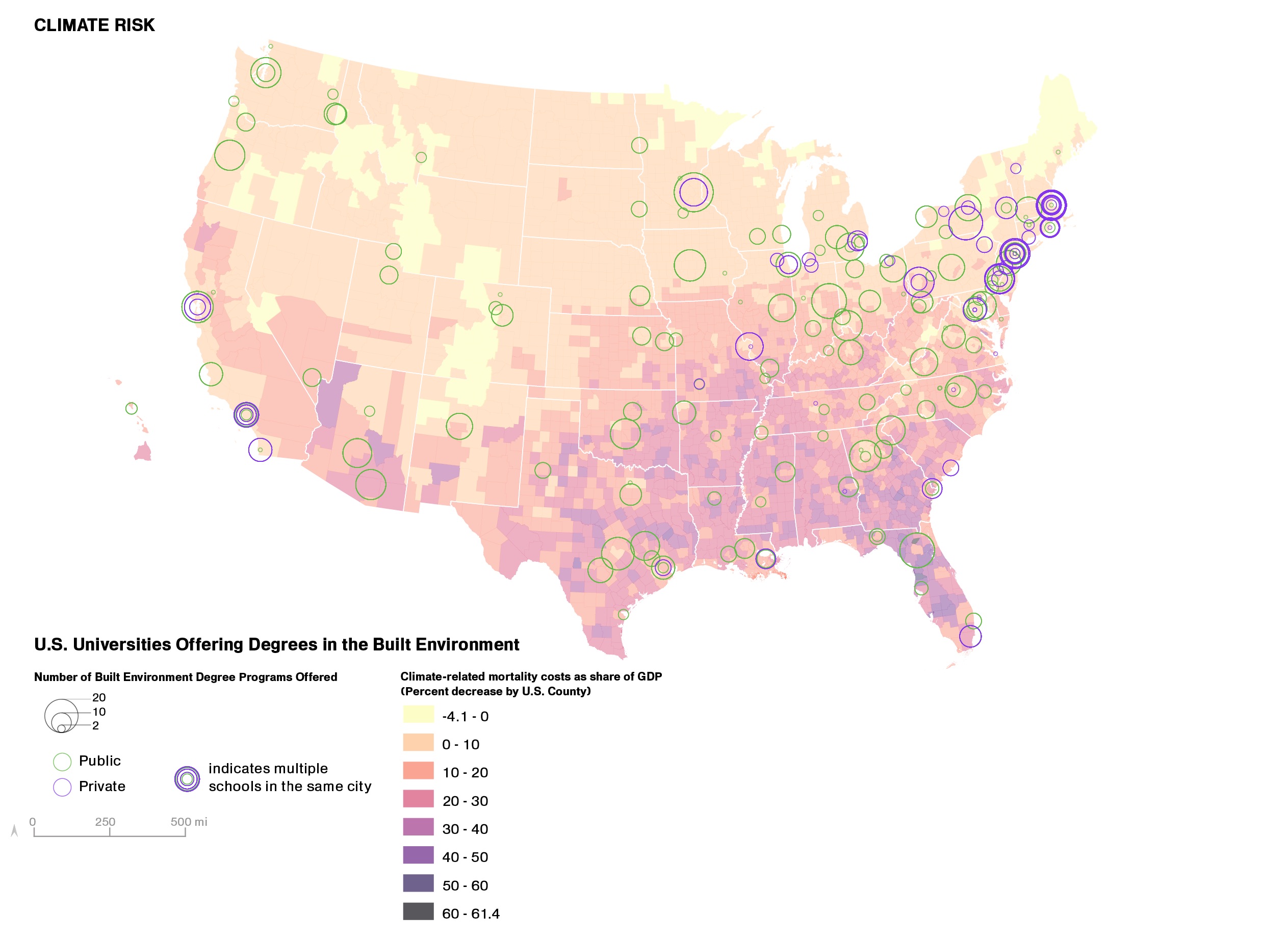 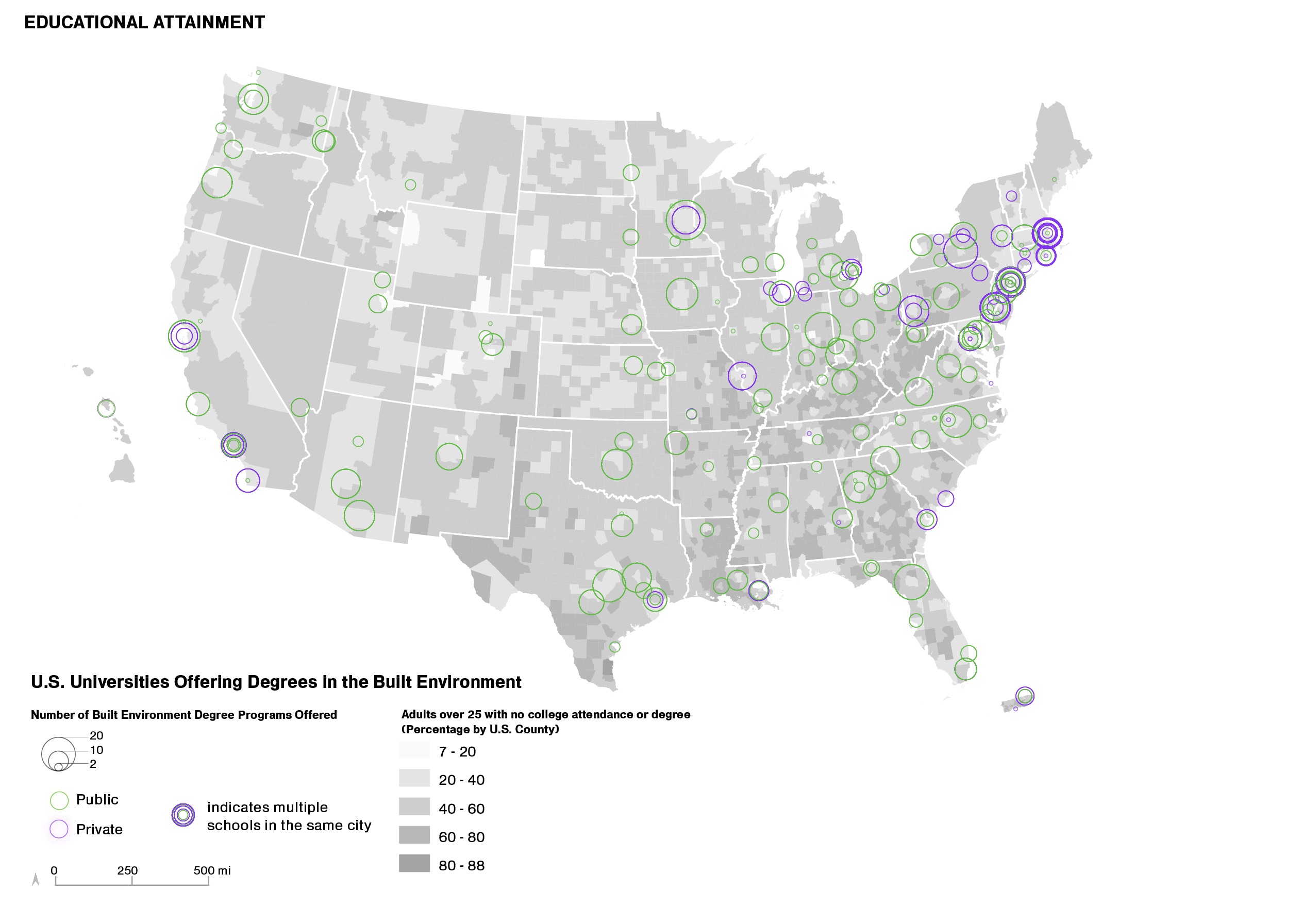 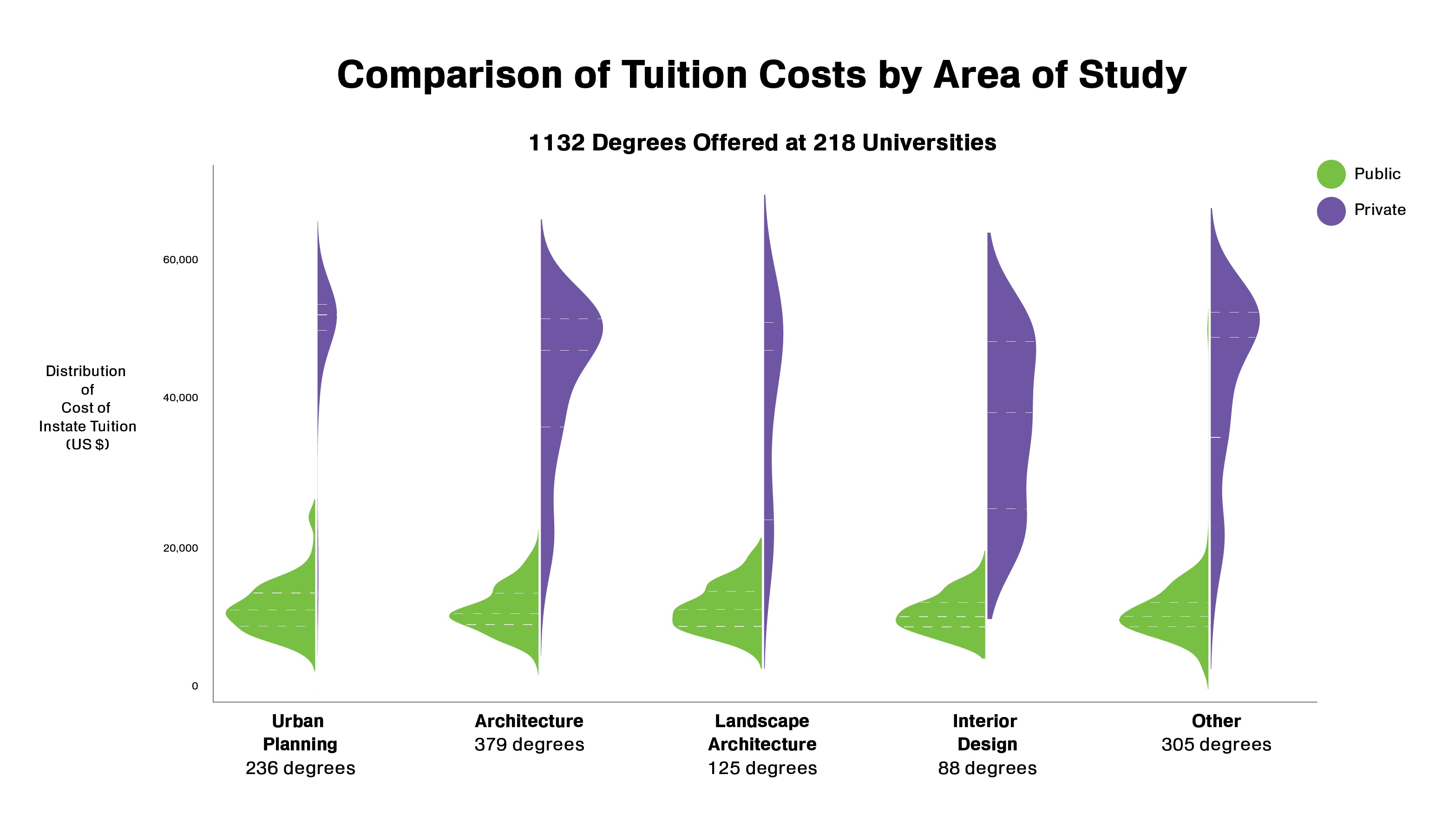 Comparison of Tuition Costs by Area of Study (HK Dunston) 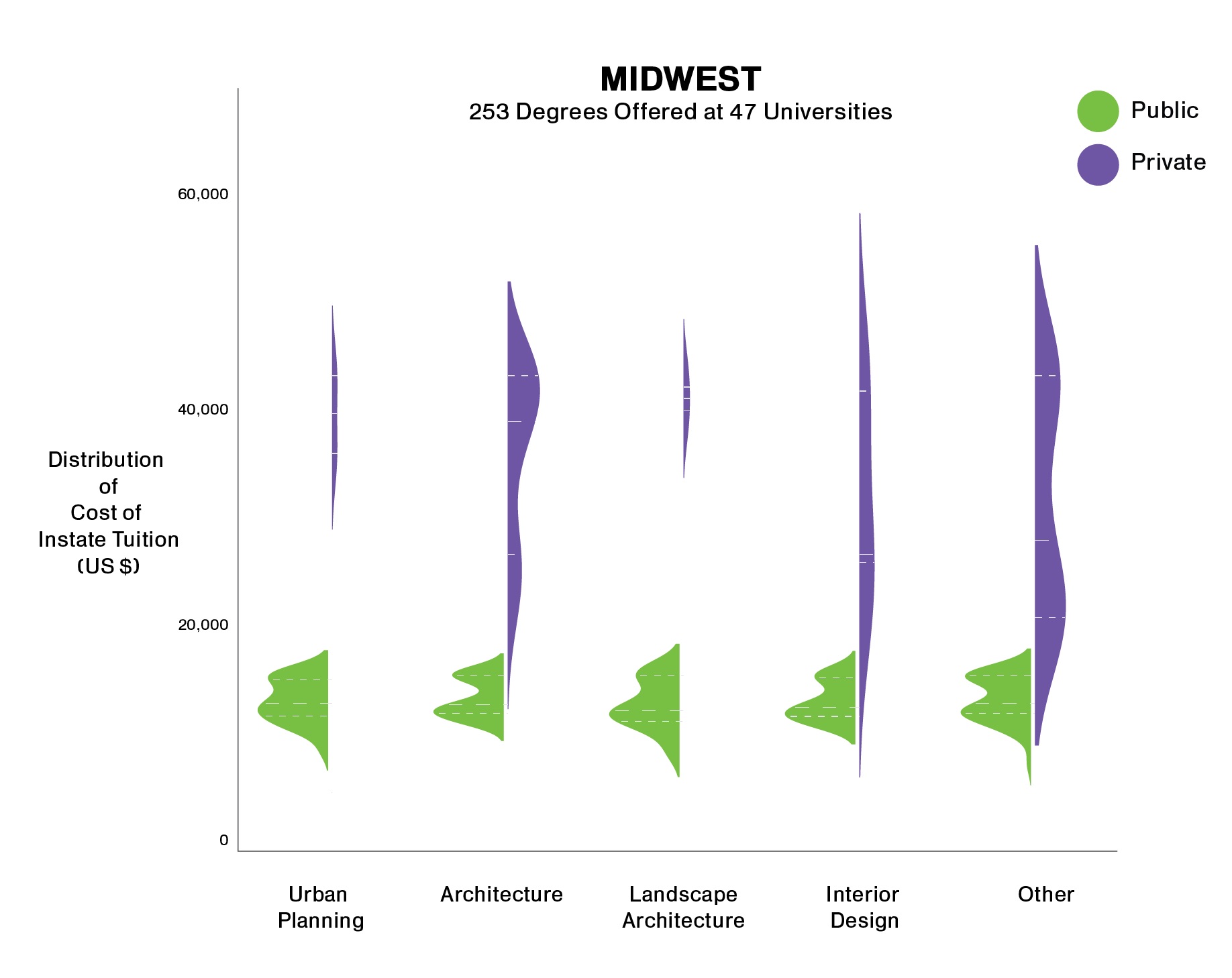 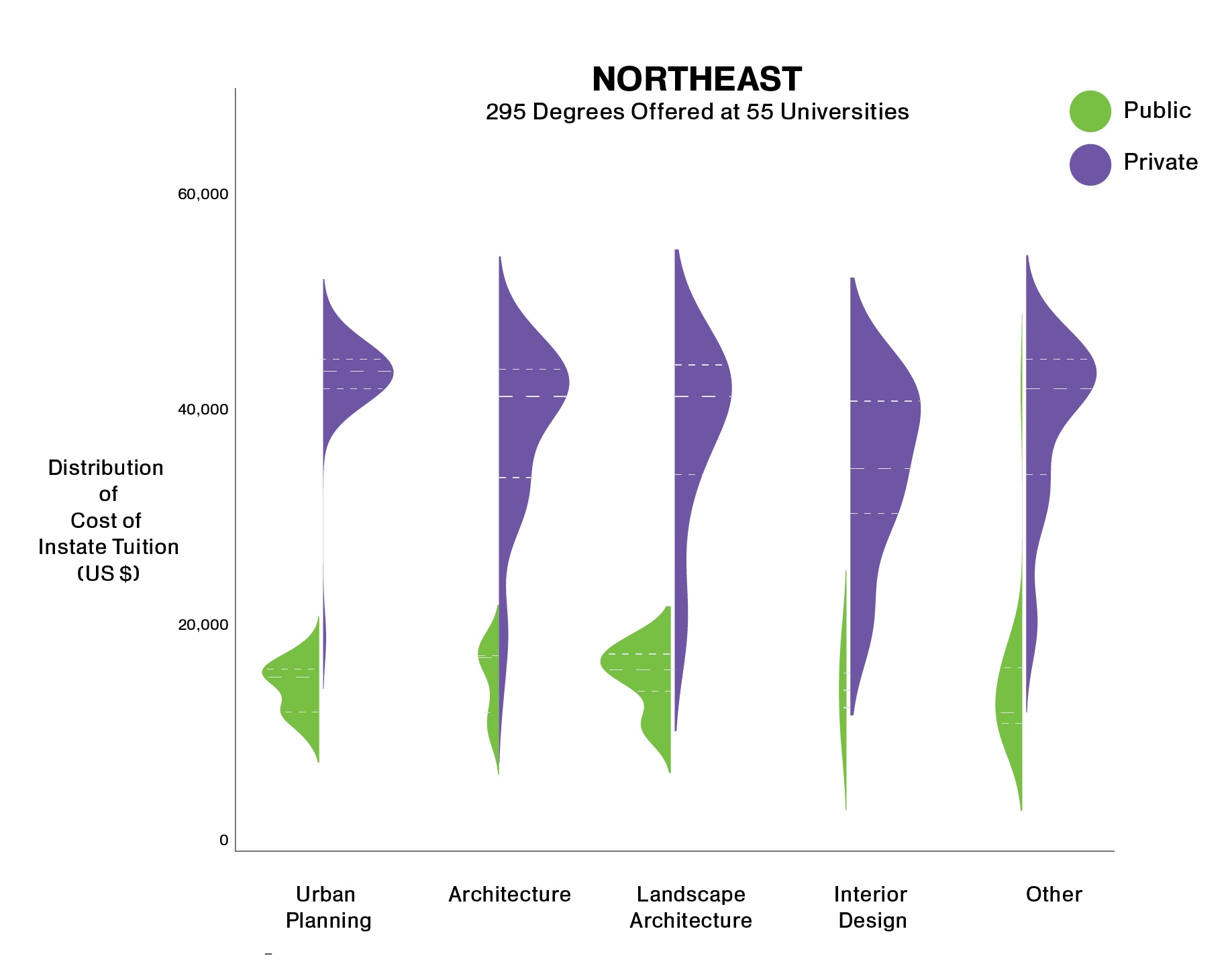 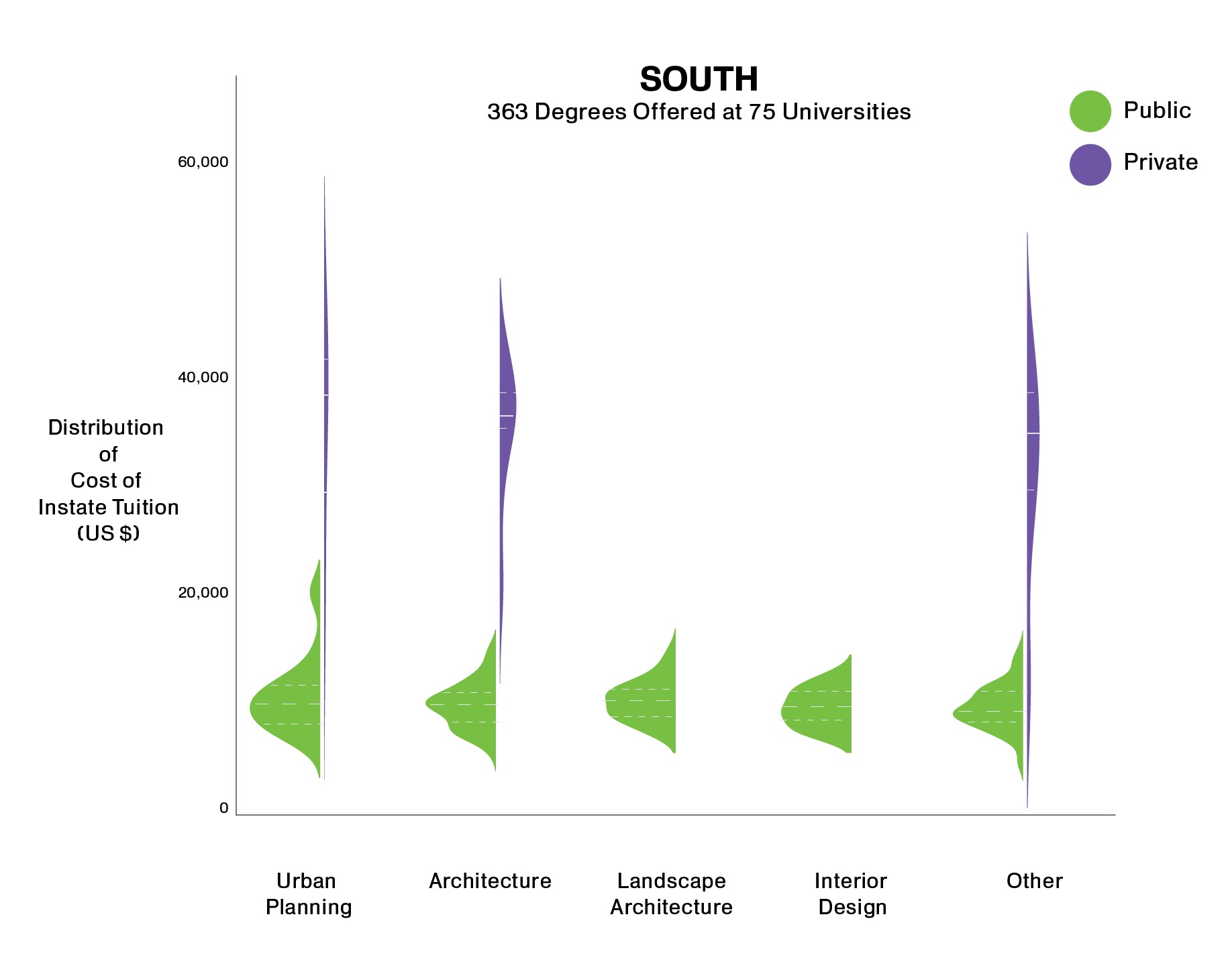 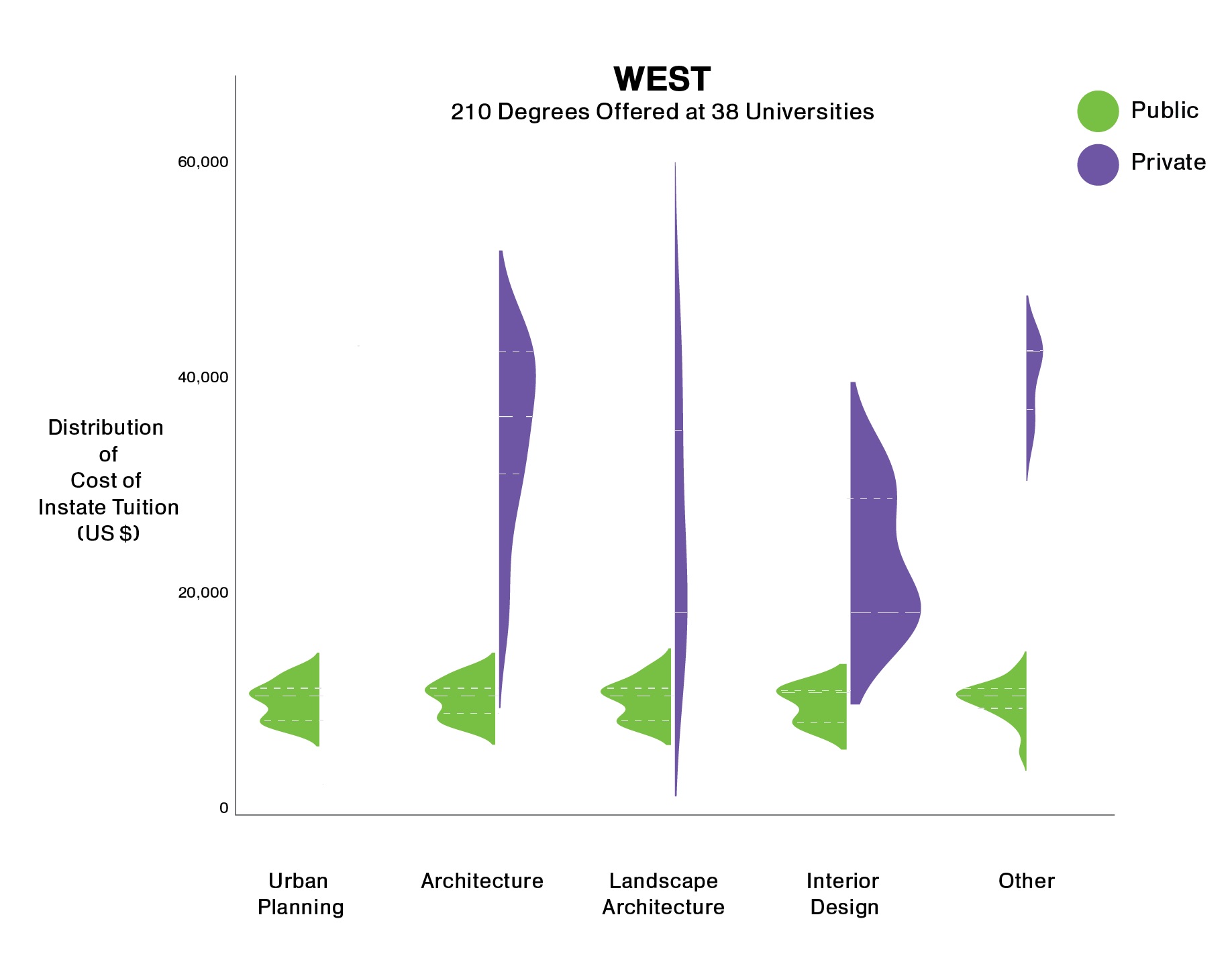 Degrees by Level in Private and Public Universities (HK Dunston)

Degrees by Accreditation in Private and Public Universities (HK Dunston)

Types of Schools in Private and Public Universities (HK Dunston)