In the spring of 2019, a team of students at the Buell Center working on the "Architecture and Engineering Services" initiative sought to better understand the major players, financing, and timelines of specific architectural projects that were significantly affected by Hurricane Katrina. And for each of them, while many questions were answered, many more emerged—illustrating both the potentials and difficulties of tracing the economic, technical, and political paths of power through the built environment. The below research, by Jiazhen Lin (GSAPP MArch '21), takes a close look at the transformation of the public education system of New Orleans through the lens of Booker T. Washington High School, connecting educational opportunity and environmental justice through one building.

Prior to Hurricane Katrina, the creation of the state-overseen Recovery School District (RSD) to take over “failing” public schools and hand over their management to independent, non-profit charter organizations highlighted the need for district-wide education reform in the Orleans Parish. Although charter schools are still funded with taxpayer money, they are operated by independent organizations with less regulation than district schools. After Katrina’s cataclysmic effects resounded throughout New Orleans in August of 2005, the RSD’s oversight of Orleans Parish schools increased from 5 to 107 out of the 128 schools in the district, largely due to the expanded provisions for takeover under Act 35.1 Due to the damage to school campuses and a decreased student population of 43,000 from 65,000 pre-Katrina totals, the 2008 School Facilities Master Plan for Orleans Parish recommended that 67 sites would be used for Pre K-8, 17 for grades 9-12, and 52 would be landbanked or repurposed.2 In some instances, the master plan designations resulted in district schools being ousted from their own buildings by charter schools and forced to convene elsewhere in temporary facilities or merge with other campuses. Booker .T Washington High School serves as a case study for how disaster recovery funding for renovating and constructing new school facilities aided the consolidation and conversion of the public school system into the first all charter district in the nation.

There is an often significant discrepancy between what government contracting officials label as "A&E" (Architecture & Engineering) and what students and professionals from the field would include in that category. The timeline below seeks to highlight both perspectives. Contracts (and their related coding) for state-led projects, such as this, proved much more challenging to track than those held at the federal level.

Other, speculatively identified, non-coded “A&E Services” are shown in italics

Photo submitted with the 2002 nomination to the National Register of Historic Places showing main school (left) and auditorium (right).

September 1942
Architecture
Booker T. Washington, New Orleans’s first high school for African American students, is built at 2101 S. Roman Street in the Central City neighborhood on top of the former Clio St. / Silver City dump, the second largest landfill in the city.7 It is funded by the federal Works Progress Administration after the local school board failed to provide funding. In the years that follow, the auditorium will become well known as a place of congregation for the African American community, hosting concerts by famous musicians, civil rights meetings, and many other major events. It was designed in the Art Deco style by E.A. Christy; a gymnasium annex was completed in 1965 by the architects Bernard & Bernard and George J. Riehl.8

2002
Booker T. Washington is added to the National Register of Historic Places.9

August 2003
The passing of Act 9 creates the Recovery School District (RSD), which was to operate under the State Board of Elementary and Secondary Education. The act allows for the RSD to take over "failing" public schools. The Type 5 charter is designated for pre-existing schools transferred to the RSD. Many school buildings were in poor condition.10

2004
With enrollment at BTW at a low of 383 students (compared to a high of 1600 when it opened, and to the first major decrease to 750 students at the end of the 1970s as a result of desegregation) and test results the lowest in the state’s academic accountability program, BTW has to suspend its curriculum and switch to a vocational/technical one for the 2005–2006 school year. As this program is for a half day and does not offer students a high school diploma, they need to attend another high school but can attend BTW in the morning or afternoon.11

May 2005
State incursion leads to Superintendent Cecil J. Picard's selection of a private financial firm (Alvarez & Marsal, NY-based) to manage the school system’s fiscal practices. “The $16.8 million deal needed the approval of the OPSB. Picard warned that he would withhold federal and state education funds totaling $300 million annually if the board refused to confirm the agreement." The firm’s authority extended beyond financial management to decisions regarding school staff.12

August 18, 2005
BTW opens for the school year as a vocational center with 250 students, still under the jurisdiction of the OPSB.13

August 29, 2005
Hurricane Katrina makes landfall. At the time of the hurricane, the district had thousands more seats than students enrolled. Out of sixty-eight parishes in Louisiana, New Orleans’s public schools ranked second to last in performance. Five Orleans Parish schools had already been transferred to the RSD and converted into charters.14 110 out of 126 schools in the city were deemed severely damaged or destroyed by the hurricane, including Booker T. Washington.

September 30, 2005
Louisiana is awarded a $20.9 million No Child Left Behind grant through the Charter Schools Program, to help charter schools affected by the hurricane reopen, to create 10 new charter schools, and to enlarge existing charters to meet needs of displaced students.15

November 2005
Louisiana Legislature passes Act 35, which expands the authority of the RSD and the criteria by which it can take over schools performing below state averages.16 The expanded criteria for a “failing school” apply only to Orleans Parish. Under Act 9, only 13 schools would have been considered failing for takeover. With the passing of Act 35, the RSD takes control of 107 out of 128 public schools.17 Accordingly, the Louisiana Legislature transferred management authority for Booker T. Washington to the RSD, although it is still owned by the Orleans Parish School Board (OPSB).

April 2006
Professional Services-CFMS (Contract Financial Management System)
Alvarez & Marsal Public Sector Services (A&M) enters into a professional services contract with the RSD, agreeing to develop and implement a disaster recovery plan for the RSD. The original contract is for 36 months, starting April 3, 2006, and outlines a fee cap of $29,103,736. (Contract 635993)18

2006
Civil Court District Judge Nadine Ramsey rules in favor of the defendants in a 1993 class action lawsuit against the Orleans Parish School Board (OPSB), the Housing Authority of New Orleans (HANO), and HANO insurers, for knowingly allowing public and private housing, and the Robert Russa Moton Elementary School, to be built on top of the former Agriculture Street Landfill in the 9th ward.19

March 2007
The A&M contract fee cap is increased to $29,638,736 in to adjust for temporary labor services A&M procured from Nationwide for the RSD. The contract termination date is changed to October 31, 2007.21

2007
Architecture, Engineering,
Other Contract-CFMS (Contract Financial Management System)
Jacobs / CSRS wins a contract with the Recovery School District to manage $484 million in school building construction; only 48% of those projects were eventually completed but they nevertheless received the full amount.24 (Contract 656575, $1,488,040 states “THE CONTRACTOR WILL ASSIST THE STATE IN MANAGING THE CURRENT DESIGN AND CONSTRUCTION OF ONGOING FACILITY PROJECTS UNDERTAKEN BY THE RECOVERY SCHOOL DISTRICT. FEMA - 100%”) (Contract 650335, $49,999 to assist the RSD with managing the construction and procurement of start-up phases of projects to place modular facilities for temporary schools) (Contract 650336, $49,999 to develop education specifications for facilities for replacement high schools) Jacobs Engineering / Jacobs Engineering Group Inc was awarded with Contracts 659753 ($27,361,204.56), 656574 ($1,886,486), and 653463 ($49,900).25

November 2008
A $1.8 Billion Master Plan is approved by the Orleans Parish School Board and Recovery School District. It calls for the renovation of Booker T. Washington and the land banking of Walter L. Cohen High School, meaning that the site could be redeveloped for other community uses or converted into housing, offices, or other public/private uses. The $700 million, FEMA–supported first phase is already underway.26

August 2010
New Orleans public schools receive a $1.8 billion FEMA grant to build or renovate about eighty-five schools. The grant bundles all Katrina damage to schools into one large project instead of a building-by-building accounting. Some schools have also made use of historic tax credits by selling them to third parties.27

2010
Architecture, Engineering, Construction Management
Jacobs / CSRS wins second three-year contract with the Recovery School District; only half of the $983 million in committed projects are completed to-date.28

October 2011
Amendments to the 2008 Master Plan are approved. Projects for BTW and Walter L. Cohen High did not change.

2012
Booker T. Washington High School is demolished, auditorium and entrance are spared due to their historical significance.30

June 2013
Architecture, Engineering, Construction Management
Jacobs / CSRS wins their third three-year contract with the RSD for $28 million. City Inspector General Ed Quatrevaux says the state Department of Education wasted $33 million in taxpayer money by overpaying the company overseeing $1.8 billion master plan. According to Quatrevaux, the state should have reduced the Jacobs / CSRS contract because of the reductions to the number and cost of school building projects. State superintendent John White and Jacobs director John Wallace say the company got a flat fee, and that there was no way to reduce payments.31

December 2013
LDEQ / USTRD accepts the remediation suggestions chosen by the RSD in response to the August 20, 2013 LDEQ Site Investigation and Risk Evaluation Corrective Action Program Report, which had found unsafe levels of heavy metals in up to ten feet of soil at BTW.32

January 2014
Architecture
CB&I Government Solutions, Inc. prepares the “Corrective Action Workplan” for the Recovery School District in response to toxic chemicals found on the BTW site. The report recommends the excavation and removal of all concrete foundations (except for the two remaining structures) followed by the top three feet of soil. Next, a layer of geotextile fabric was to be placed to keep lower contaminated soil from shifting upward, followed by filling the three feet of replacement soil and building a new foundation on top.33  (Contract 2000121423, $471,512)34

2014
Arrangements for the BTW property are made between the OPSB and the RSD. The RSD is to identify land near the BTW site for use as green space or athletic fields, as well as secure the S. Prieur Street right-of-way for the school. The OPSB will purchase or acquire land on behalf of the RSD, with the purchase commitment limited by whatever funds come from the sale of surplus or landbanked properties, or as provided by the RSD.35

May 2014
The Recovery School District shuts down the last five public schools, becoming the first all-charter district in the nation. Total enrollment is lower than it was pre-Katrina, due to a decreased city population.36

May–June, 2015
The Louisiana House Education Committee advances House Bill 180 to ban building schools on toxic waste sites in response to the Recovery School District’s unveiling of plans to rebuild Booker T. Washington High School on the same site for $55 million.37 The bill failed to pass in the Senate Education Committee.38

August 3, 2015
The Walter L. Cohen Alumni Association and the Sierra Club send notice to file suit, pursuant to the Resource Conservation and Recovery Act 42 U.S.C. 6972(b)(1), to protest the potential moving of Walter L.Cohen High School students to the Booker T. Washington campus.39

May 2016
Act 91 passes. The bill intends to transfer all schools under RSD oversight back to the OPSB by July 1 2018. Schools will still be independent charters run by non-profit boards, but they will now be overseen by the OPSB and its superintendent.42

June 16, 2017
Booker T. Washington High school is taken off of the National Historic Register due to the demolition of most of its campus.43

December 2018
KIPP BTW students (ninth and tenth grades) are currently in school at 2514 Third Street. BTW is not (yet) listed under the Orleans Parish School Board leadership on the National Center for Education Statistics.44 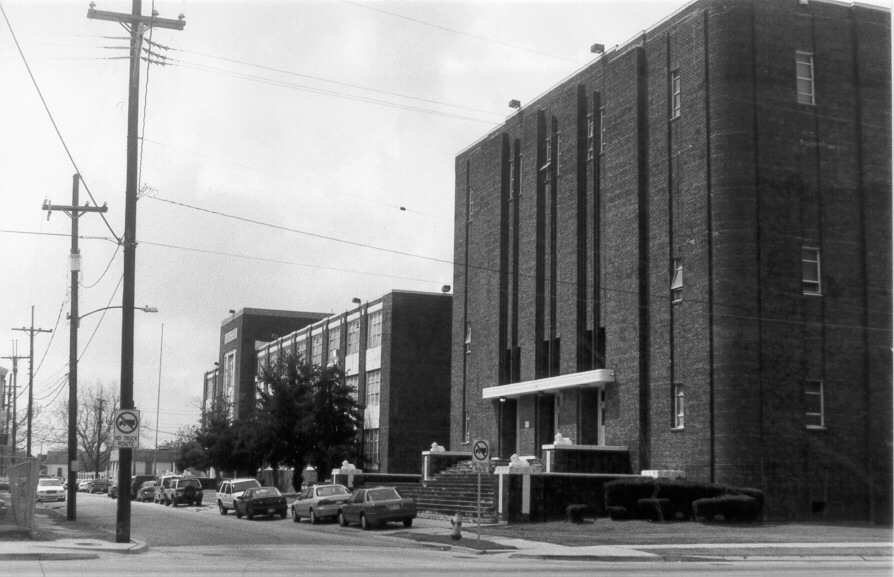 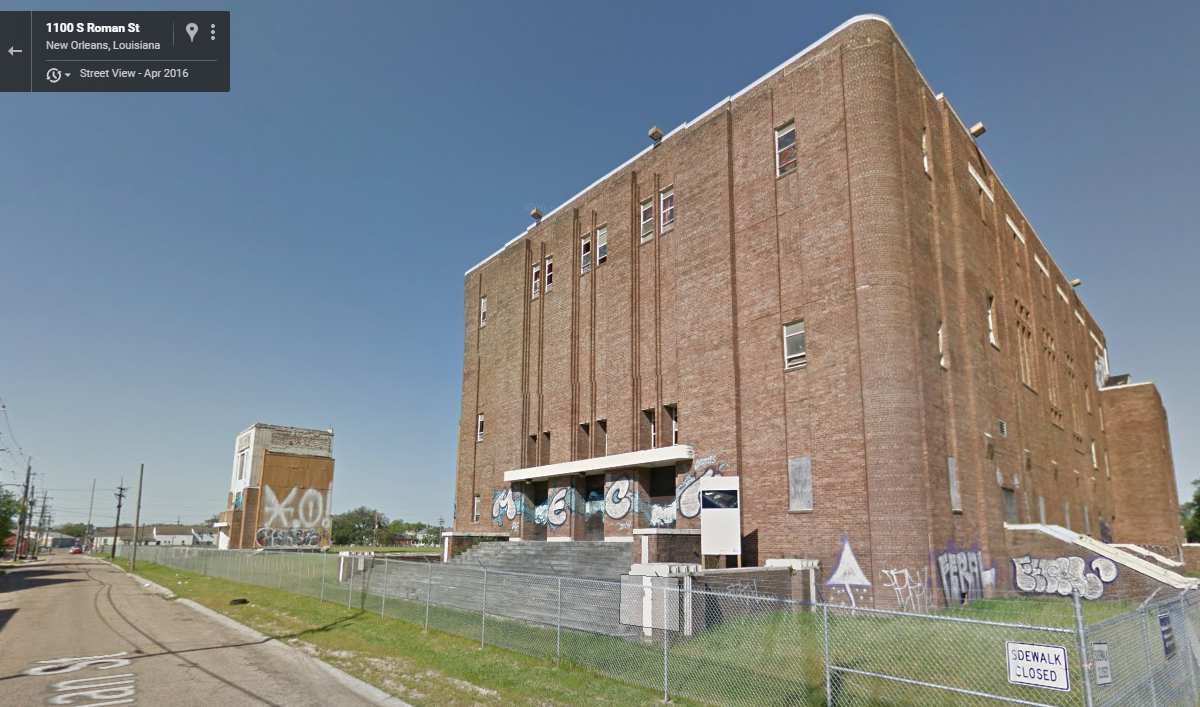 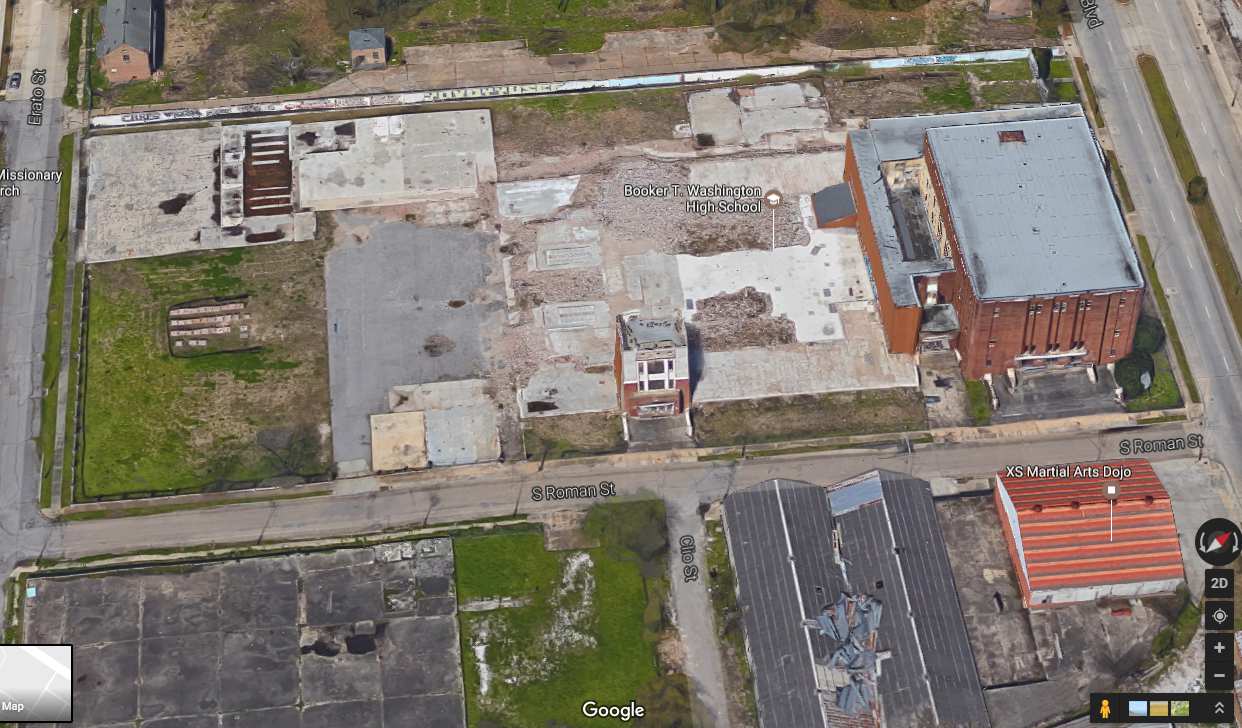 Photo showing the preserved parts of the complex following demolition. Submitted with the 2002 nomination to the National Register of Historic Places 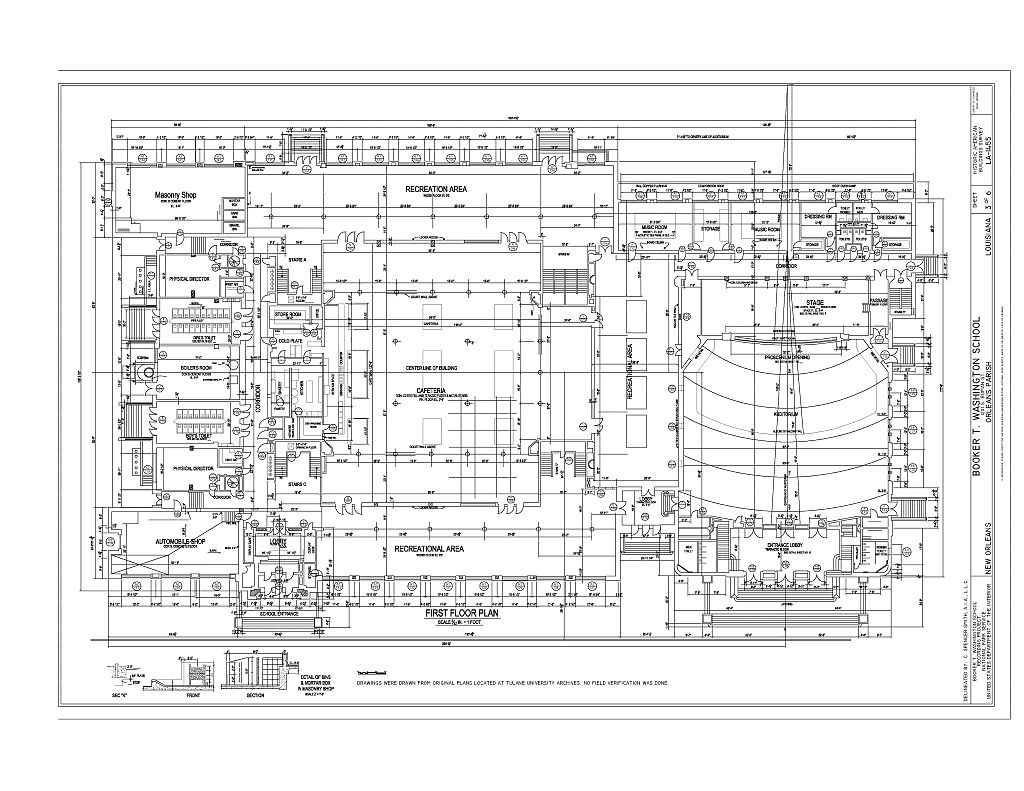 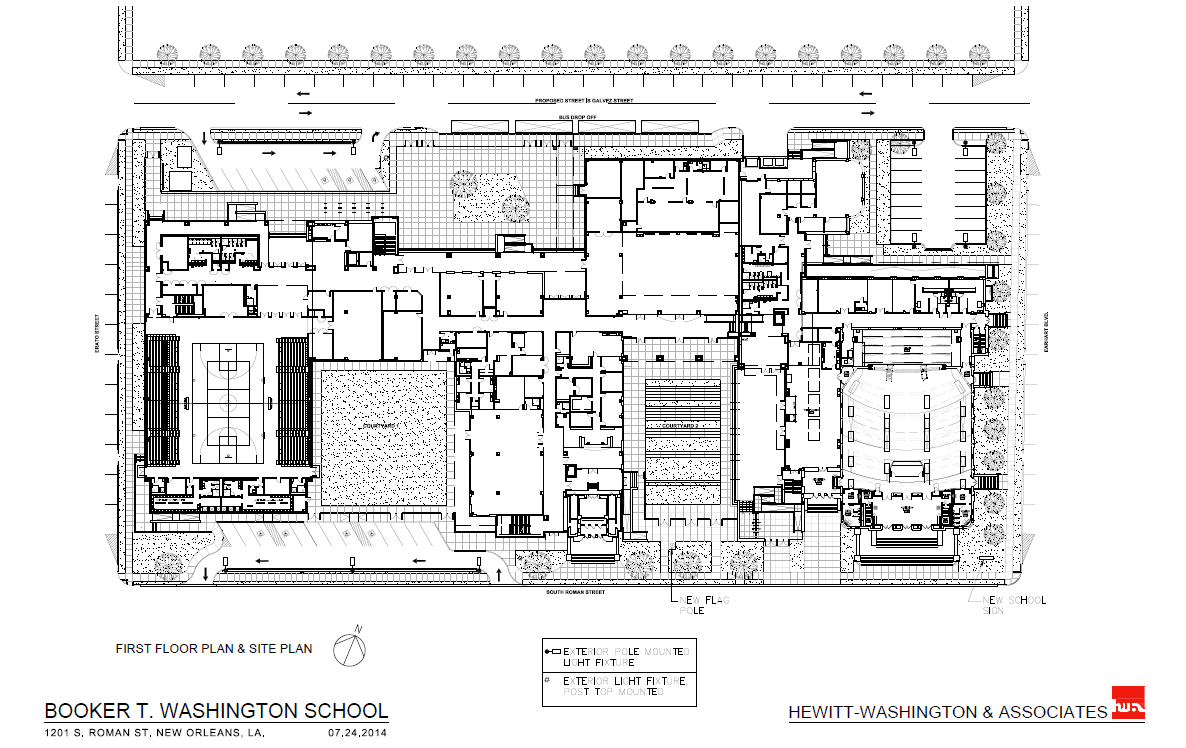 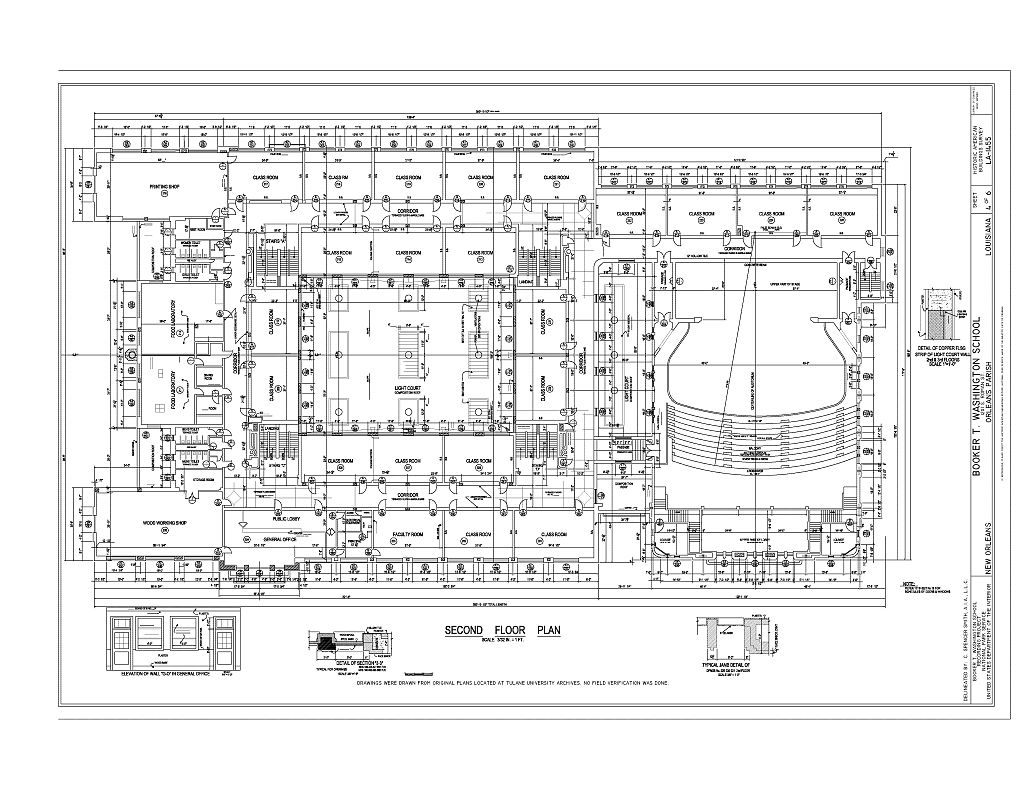 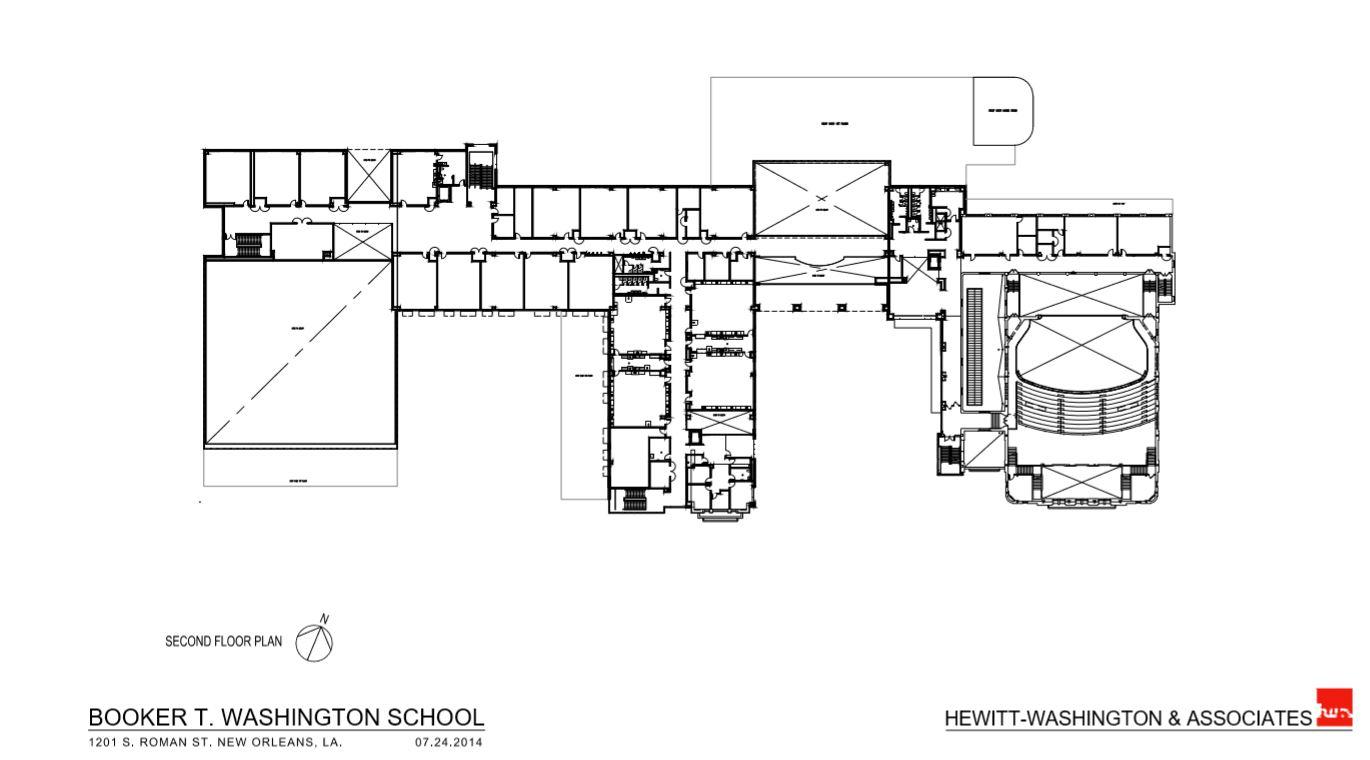 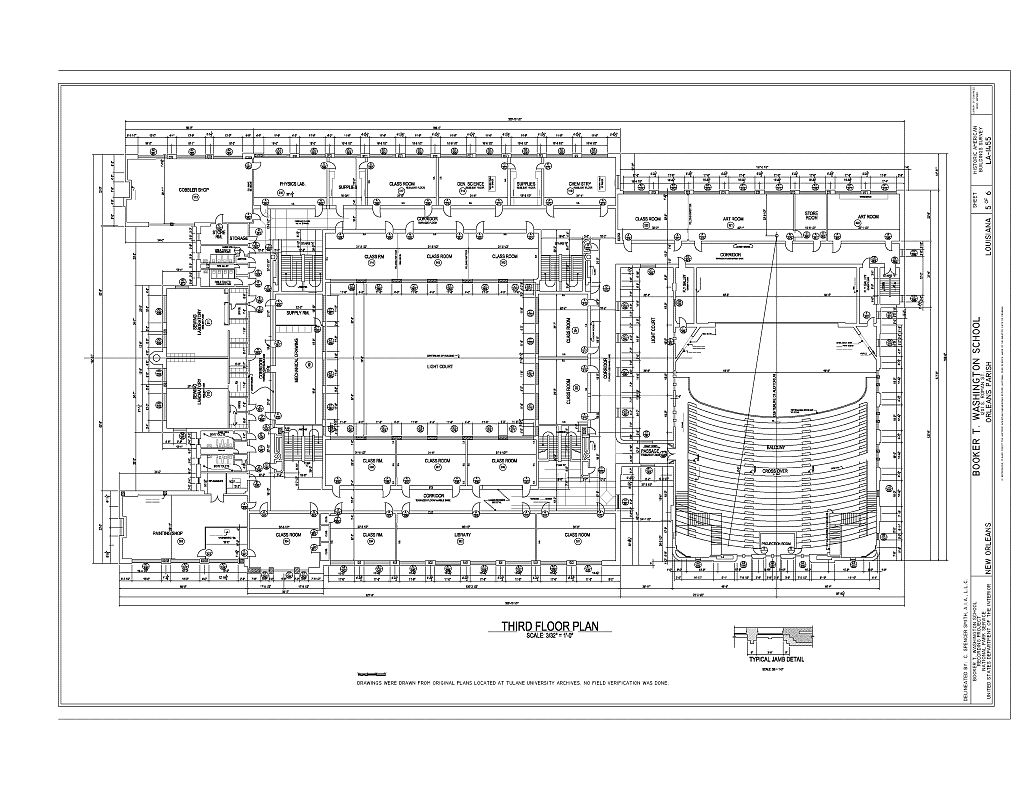 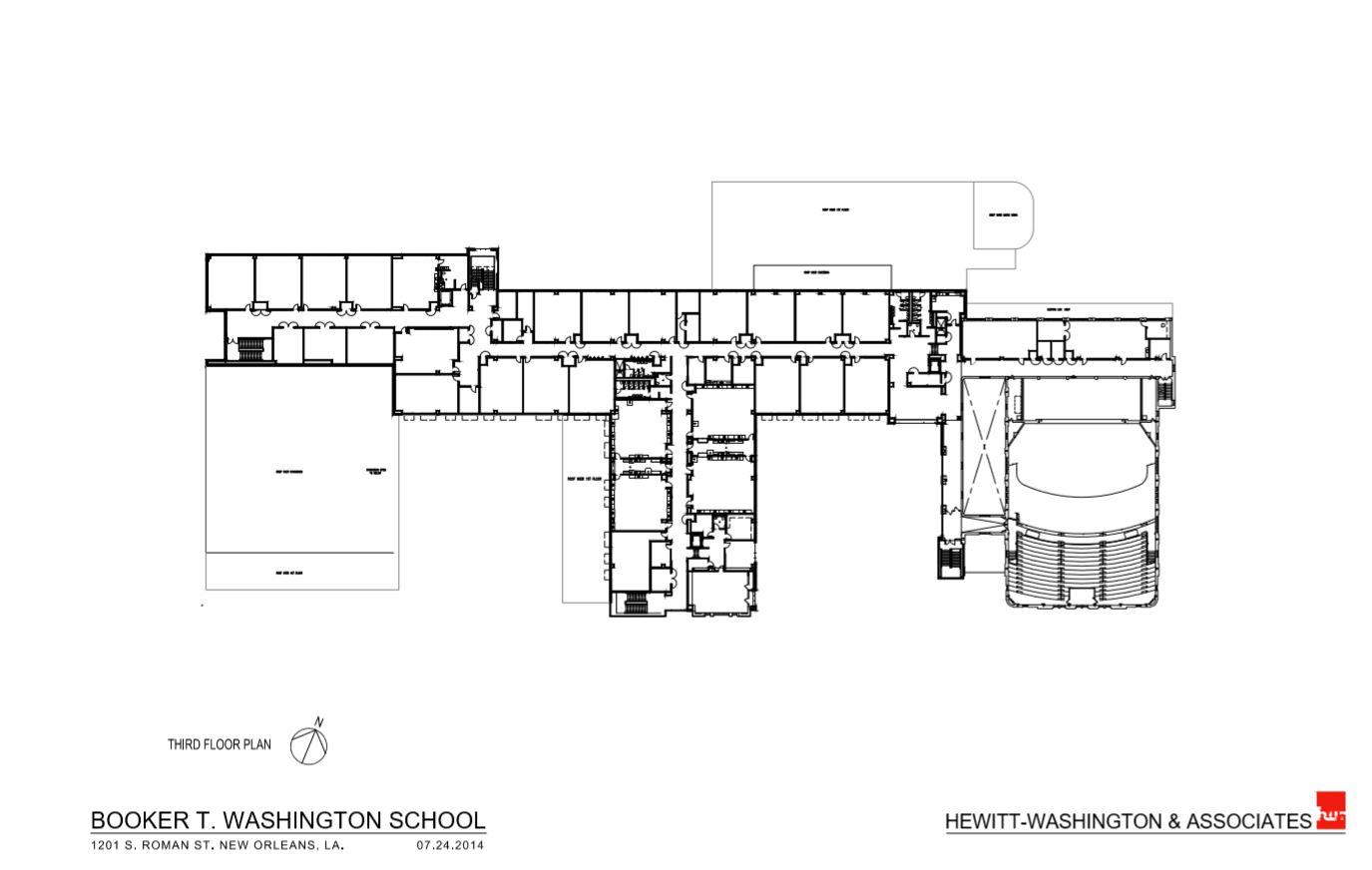 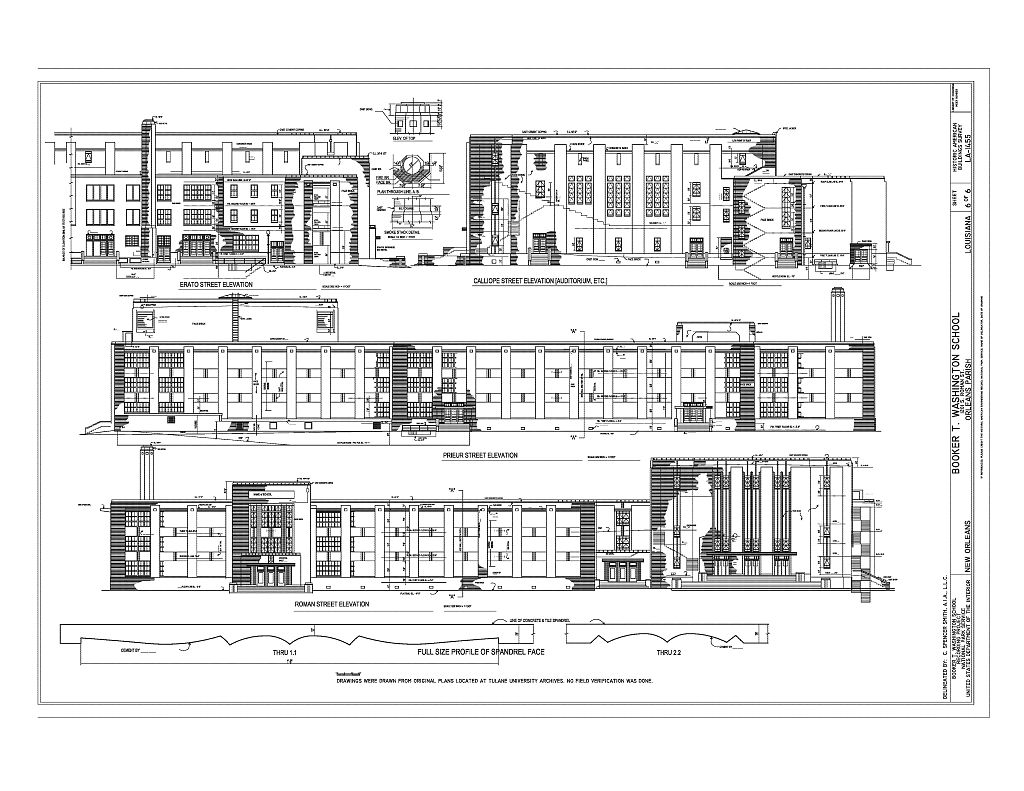 Original Elevations by Architect E.A. Christy, from from the Historic American Buildings Survey (Library of Congress)