On July 30, twenty-six teachers from professional schools in the built environment gathered virtually with the Buell Center and additional faculty from Columbia GSAPP, for an online workshop on "Green Reconstruction," which studies the interconnectedness of today's crises of care, political economy, and climate—emphasizing the pervasive force of racial capitalism throughout—to imagine what a genuinely system-wide response must entail.

Acknowledging that the participants were likely even busier than usual this particular summer given the confluence and concentration of crises, all nonetheless shared a commitment to action. As befits academic work, the actions proposed and discussed in the workshop were mostly long term, and entailed step-by-step deliberation. The focus was professional education in the built environment, with an emphasis on architecture, landscape architecture, and urban planning. The aim was and remains collaborative curricular transformation, nationwide.

The Buell Center laid the groundwork for the workshop empirically, with a team of nine graduate students documenting professional and pre-professional curricula at all Association of Collegiate Schools of Architecture, American Society of Landscape Architects, and American Planning Association member institutions. A summary of that student-led work is visible here. Also foundational was an influential article by the sociologist Nathan Glazer, “The Schools of the Minor Professions,” from 1974. In it, Glazer classifies urban planning and, in a qualified sense, architecture, as “minor” in relation to the classically “learned” professions of law, medicine, and divinity. Participants referred to this anachronism as leverage, a way to elevate the responsibilities of their collective fields in building, administering, and transforming the social contract from below established discourse, through the day-to-day pedagogical work of changing imaginations and changing practices.

The model was the “public assembly” that the Buell Center co-convened in fall 2019 to test concretely the local implications of the Green New Deal. Where that event centered local environmental justice activists, policy advocates, and academics, and included a participant audience of hundreds, this “Green Reconstruction” workshop was limited to a group of colleagues in architecture, landscape architecture, and urban planning from across the country. Borrowed from that assembly was a two-part structure, adapted to Zoom, of smaller, thematically organized breakout groups followed by a larger plenary session.

For each group, the Buell Center Graduate Research Assistants offered a thematic focus based on specific information drawn from the aforementioned survey of over a thousand professional, pre-professional, and post-professional programs in the built environment across the United States. These themes and the case studies that accompanied them were prompts, offered only to focus discussion and generate responses.

Breakout Group number one discussed the notion of professionalization as it shapes and is shaped by curricula of the built environment. Students in all programs, while bearing the typically high costs of education, experience the often competing pressures of “core” requirements, “elective” specializations, software and skill competencies, and the idea of self-marketability once they enter the workforce. In all of this, individual professionalisms of various types tend to take precedence over collective responsibilities toward the public good. How much of curricular decision-making is directed by accreditation processes, private firms, and industry interests, as compared to other forces “inside” the fields’ study?

Ranging from architectural history to design to social science, "research" in schools of the built environment has a dynamic relationship with the communities with which it engages. The second breakout group focused on those research centers that interact with their institutions’ curricula by providing specialized masters, studio experiences, or otherwise “embedded” student projects. This intertwining of community and research involves the creation, transformation, and, in some cases, exploitation of communities. Led by Graduate Research Assistants Rosalie Singerman Ray, Andrés Julián Alvarez Davila, and Hayes Buchanan, the definition of community was left purposely broad, stretching from those formed around a single design-build project or neighborhood, to entire industries as they interact with state and national policymaking. How can these often narrowly construed efforts address systemic and historically-determined challenges like climate change? How might engagement with diverse communities confront technocratic, racially-biased legacies and suggest new forms of self-critical pedagogy? How does the creation of particular degrees or the propagation of particular research methodologies build communities of practice, and what implications do they have for engagement with the historically marginalized groups so often foregrounded in community research centers? The group explored these questions as they are made manifest via financial ties, “on the ground” infrastructure, and vehicles for self-propagation. Discussants included Aimi Hamraie, Farhan Karim, Nea Maloo, Khaled Mansy + Jeanne Homer, Juliana Maxim, Kiel Moe, Athar Mufreh, Marc Norman, and Quilian Riano.

Breakout Group number three discussed student and faculty governance as it impacts curricula of programs dealing with the built environment. Led by Graduate Research Assistants Henderson Beck, Malcolm Rio, and Anays Mical González Sánchez, the research defined governance as any form of student or faculty representation in the decision-making processes of an academic department, school/college, or university/institution. Despite some variability, the team found a strong correlation between the presence of student governance organizations and the presence of institutionalized faculty governance. Additionally, the team found a weaker correlation between the presence of student governance and faculty unionization. These correlations raised a number of questions: Does the presence of strong faculty and student governance organizations affect curricula? Does the presence of faculty, graduate, or undergraduate unionization affect or provide a model for other forms of faculty and student organizations? Do curricula impact how students organize and network after graduation? Do alumni frameworks buttress or contradict departmental mission statements? How do student governance and external collaboration efforts impact students’ relationship with the built environment and local community? The group discussed these questions through three lenses: faculty and student labor formations and curricular structures, alumni networks and their impacts on academic and professional development, and inter-institutional collaborations driven through faculty or student efforts. Discussants included Fallon Samuels Aidoo, Gabriel Cuellar, Bradford Grant, Sophie Hochhäusl, Zachary Lamb, Ana María León, Ivonne Santoyo-Orozco, and June Williamson. 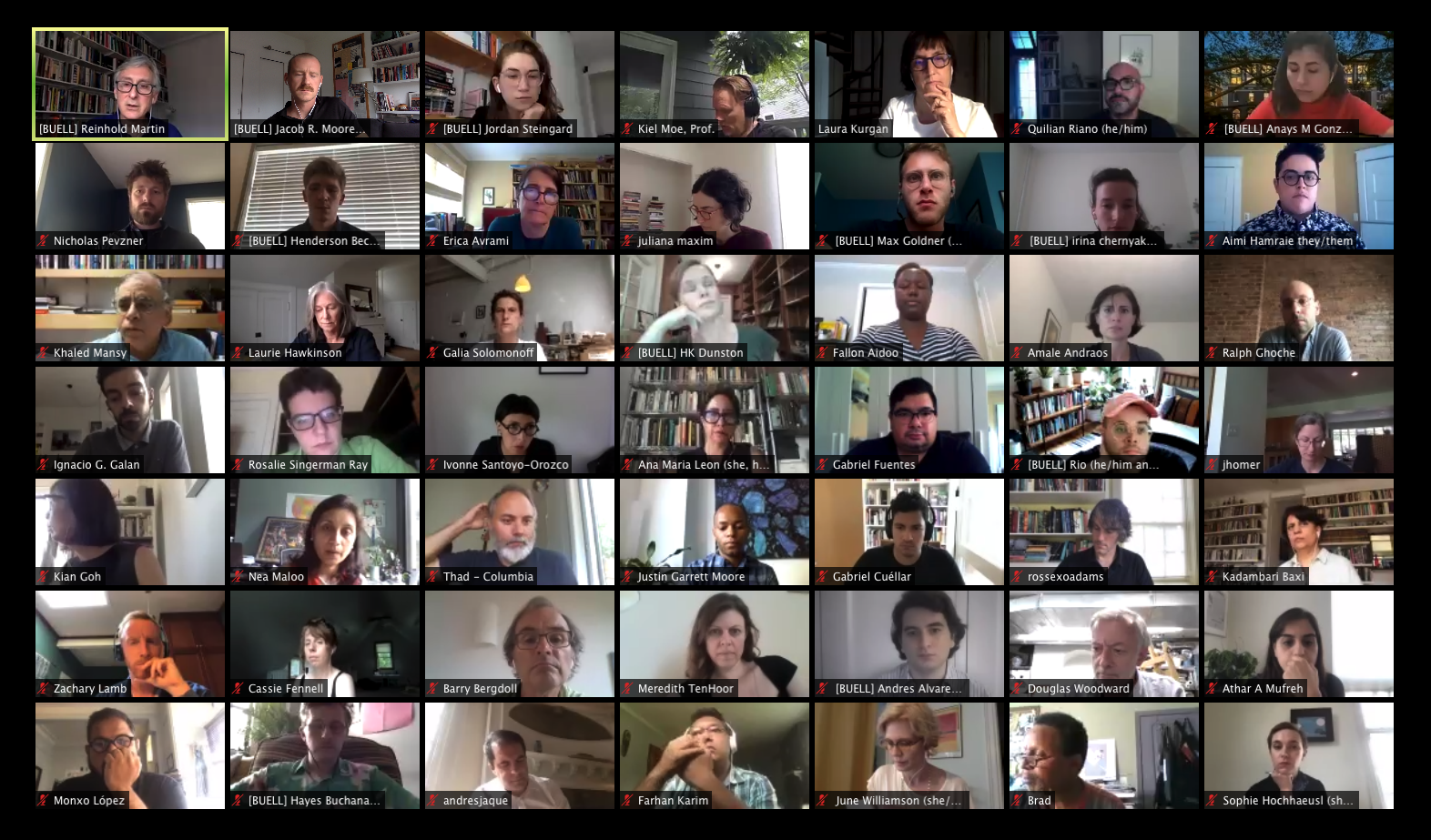 Professional Schools of the Built Environment: A 2020 Snapshot
Centering Community Design
The Professionalization of Care: Health