The methods and effects of emergency management, especially regarding its relationship to race, invite further analysis in a broader infrastructural context. Considering questions around incorporation, debt, and infrastructural access—whether it be of a small Freedmen’s town on the edge of Houston, or an entire island such as Puerto Rico—brings to light issues of access, discrimination, and financialization, requiring an overall conceptual framework that explains parallel events as more than aberration. “The Right to Infrastructure” seeks to elucidate some of these cases, and develop strategies so that they might be more effectively addressed.

In this project, Danielle Purifoy and Louise Seamster identify and examine a pattern of racialized extractive practices and predatory governance in black towns. They define black towns as communities comprised of a majority-black population with black leadership, regardless of municipal incorporation or demographic history. According to this pattern, the consequences of chronic dispossession through practices such as the seizure of water rights, the denial of eligible public funding, and the imposition of exorbitant and discriminatory tax rates are reframed as deficiencies of black towns themselves, or simply curious anomalies. Charges of failed leadership, incompetence, and even fraudulence, are frequently leveled against local black officials, particularly during intergovernmental disputes over resource access.

The fight for basic services is replicated in black towns of all types across the U.S., from unincorporated black towns in the South to majority-black industrial centers in the North. Most journalistic coverage of these black towns, however, treats each one as a surprising, special occurrence. In each supposedly isolated instance, the black town’s failure to get basic services—a clear indicator of structural racism—is framed in the public sphere as a case of “lack of leadership,” “incompetence,” “non-compliance,” or even “negligence.”

To understand black towns requires understanding white towns, cities, and unincorporated places as raced spaces. In order to answer commonly asked questions about black towns, Purifoy and Seamster plan to delve deep into ordinary structures of governance: infrastructure, taxation, incorporation and annexation, loan and grant agreements, etc. They investigate processes of erasing and rebuilding—dynamic processes that produce the illusion of stability. How do government arrangements shape land outcomes and resources? How do those disparities, in turn, predict the re-shaping of governance?

Currently, Purifoy and Seamster are developing a conceptual framework for understanding black towns within extractive white space, highlighting questions of citizenship, extraction, and exclusion as we focus on how legal, spatial, racial, and economic systems structure black spaces’ access to infrastructure and facilitate environmental violence. In their framework, Purifoy and Seamster draw on several theoretical principles that nest black towns in a larger sociopolitical, economic, and visionary context. First, in the realm of politics, they apply Charles Mills’ “racial contract”1 on a local level, looking at how the rules that constitute both black and white towns (and the spaces between them) are far from the neutral, stable structure usually imagined. Second, they take a relational approach to these black and white towns, describing an intimate bondage between them, forged through plantation power structures but reproduced today through a material and affective dependency. Third, they foreground physical space by examining how black towns have enacted black spatial imaginaries2 and served as crucial sites for the envisioning and practicing of alternative modes of governance.

Purifoy and Seamster build this conceptual framework because they can’t understand how infrastructural access is racialized without it. They focus on the social, political and economic mechanisms that map resources, exclusion, and racial inequalities onto physical spaces. The study of environmental racism has shown a broad array of adverse impacts on communities of color, from siting environmental hazards to the quality of land allocated to black communities, and lack of access to clean water. These effects are compounding—for example, environmental ruination from pesticide use to industrial pollution made Flint’s river corrosive, while state and county–level political machinations led to Flint’s use of corrosive water, and racialized assumptions about credibility and deservingness led officials charged with ensuring clean water access to ignore and mock residents’ complaints. Effects range from lead poisoning to property value destruction (which in turn structures the city’s ability to pay for future improvements). Similarly, the black towns of Sandbranch and Tamina, Texas need a municipal water supply because extractive gravel factories and oil fields sited along their borders have rendered their well water undrinkable.

Purifoy and Seamster combine an environmental focus with data and frameworks from urban studies, fiscal sociology, geography, and law to show how these harms are not the result of discrete “racist” acts, but are written into the law itself, and are central to the functioning of racial capitalism.3 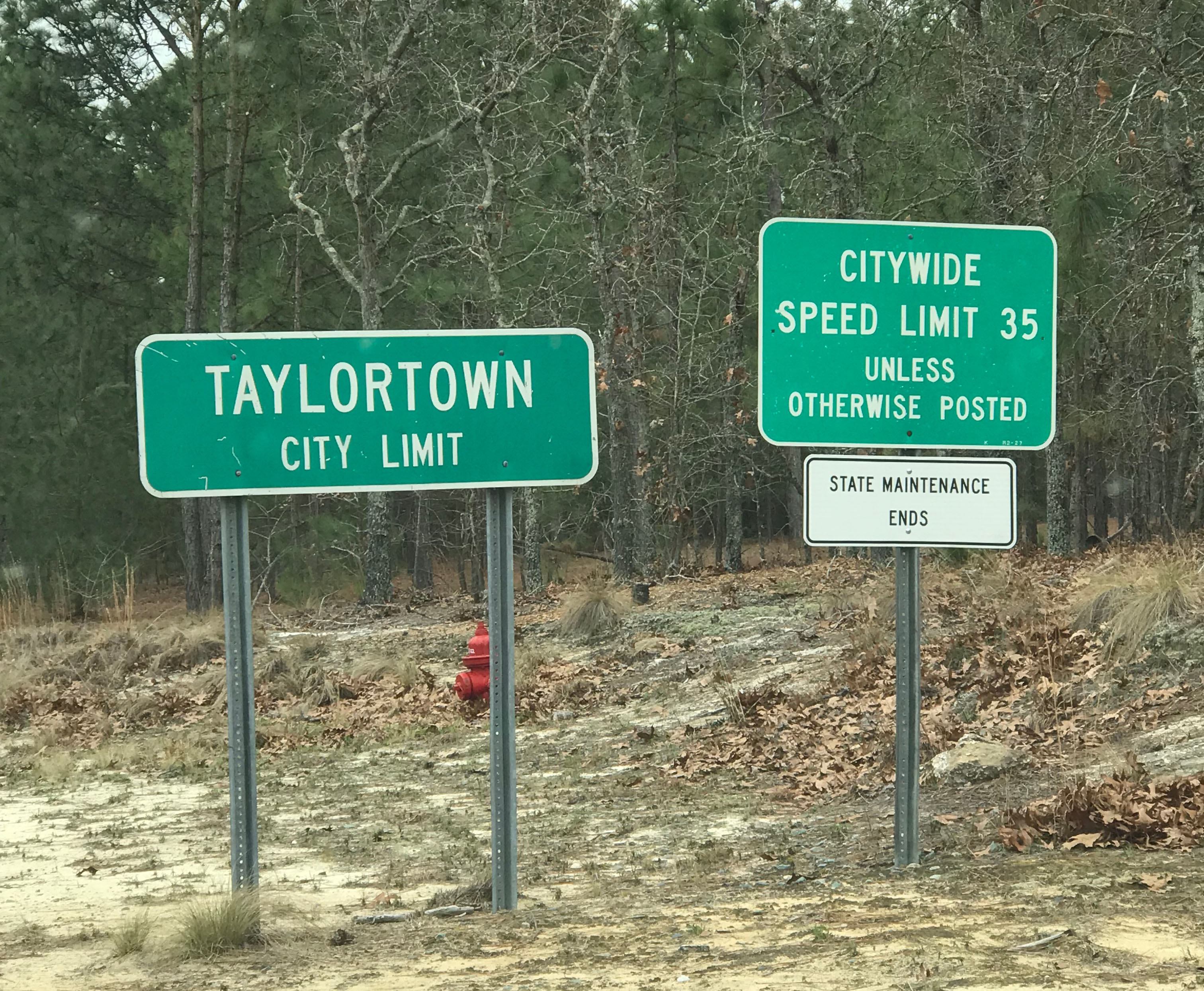 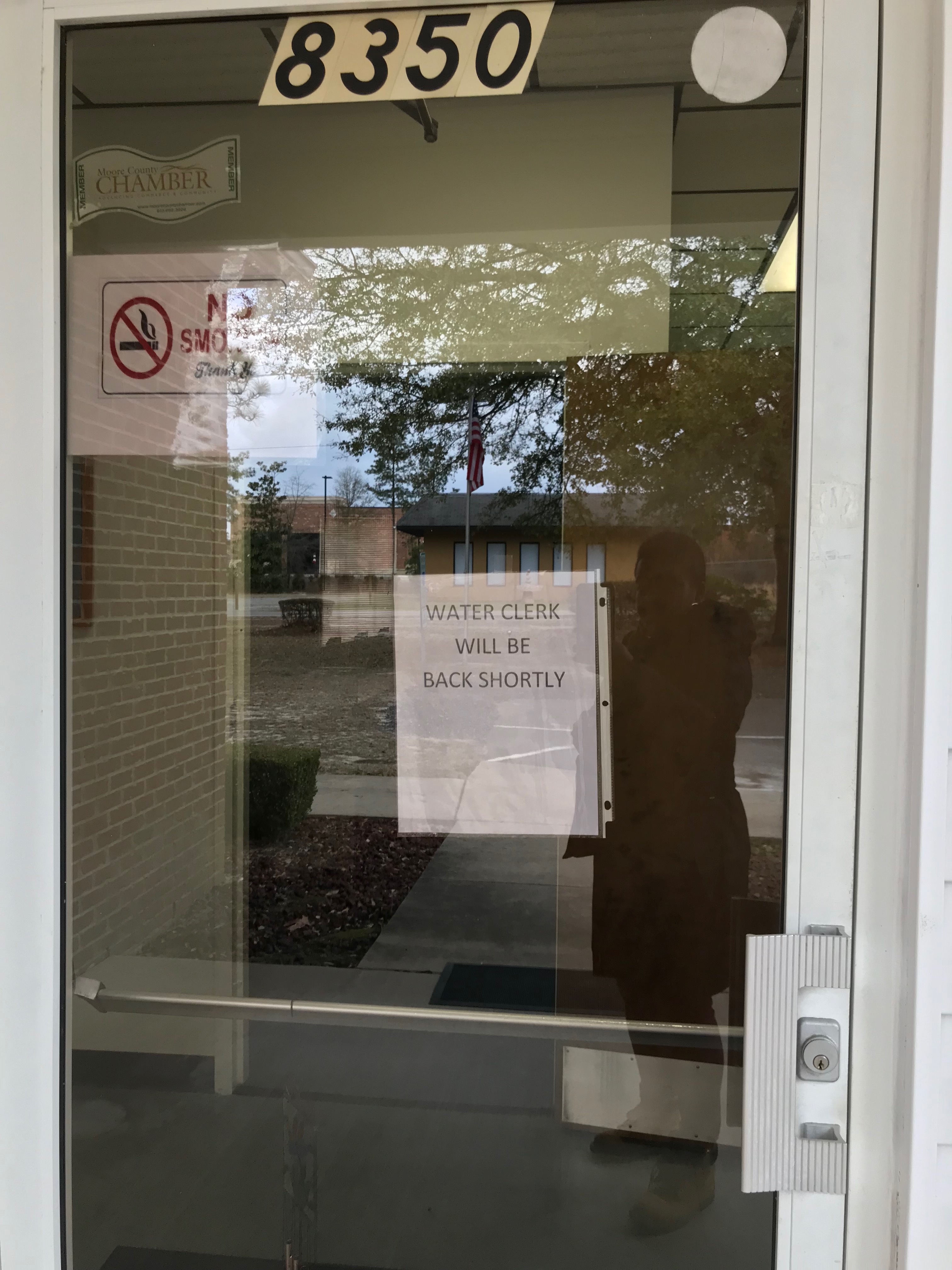 "Water Clerk Will Be Back Shortly" (Danielle Purifoy) 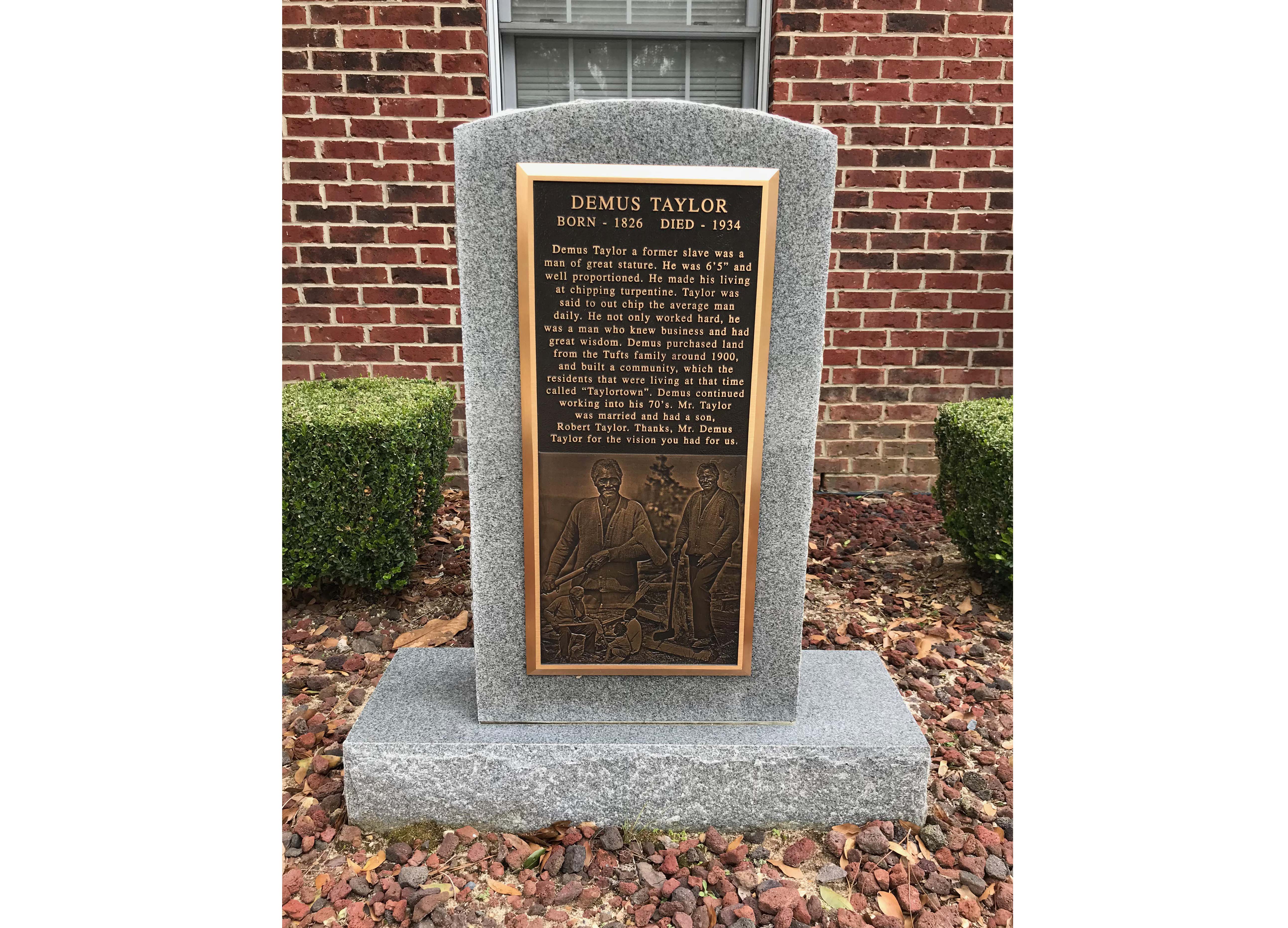 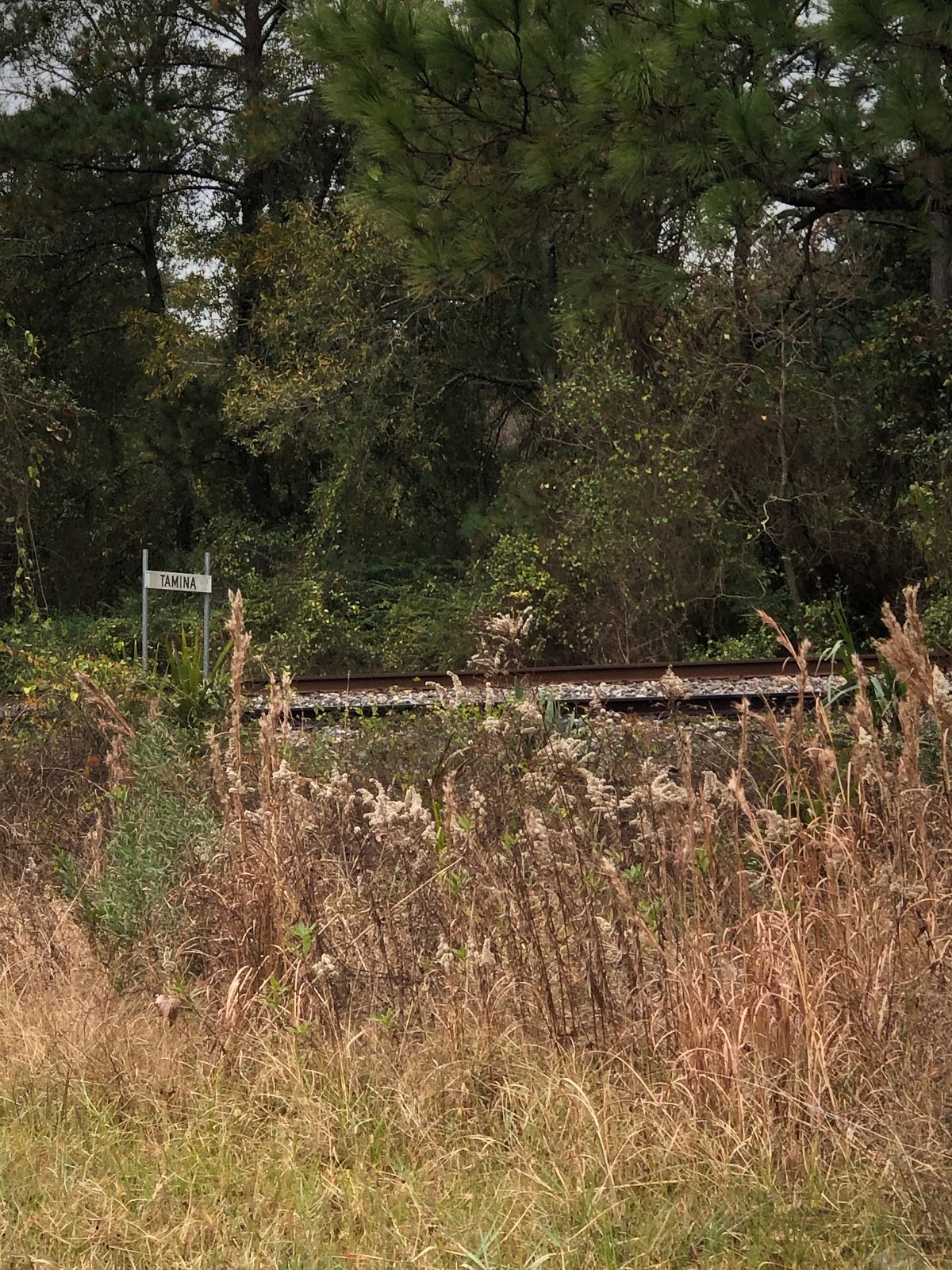 Tamina, TX was officially founded as a train stop in 1871, although local historians dated it decades earlier. Early on, Tamina was known for its lumber mills. 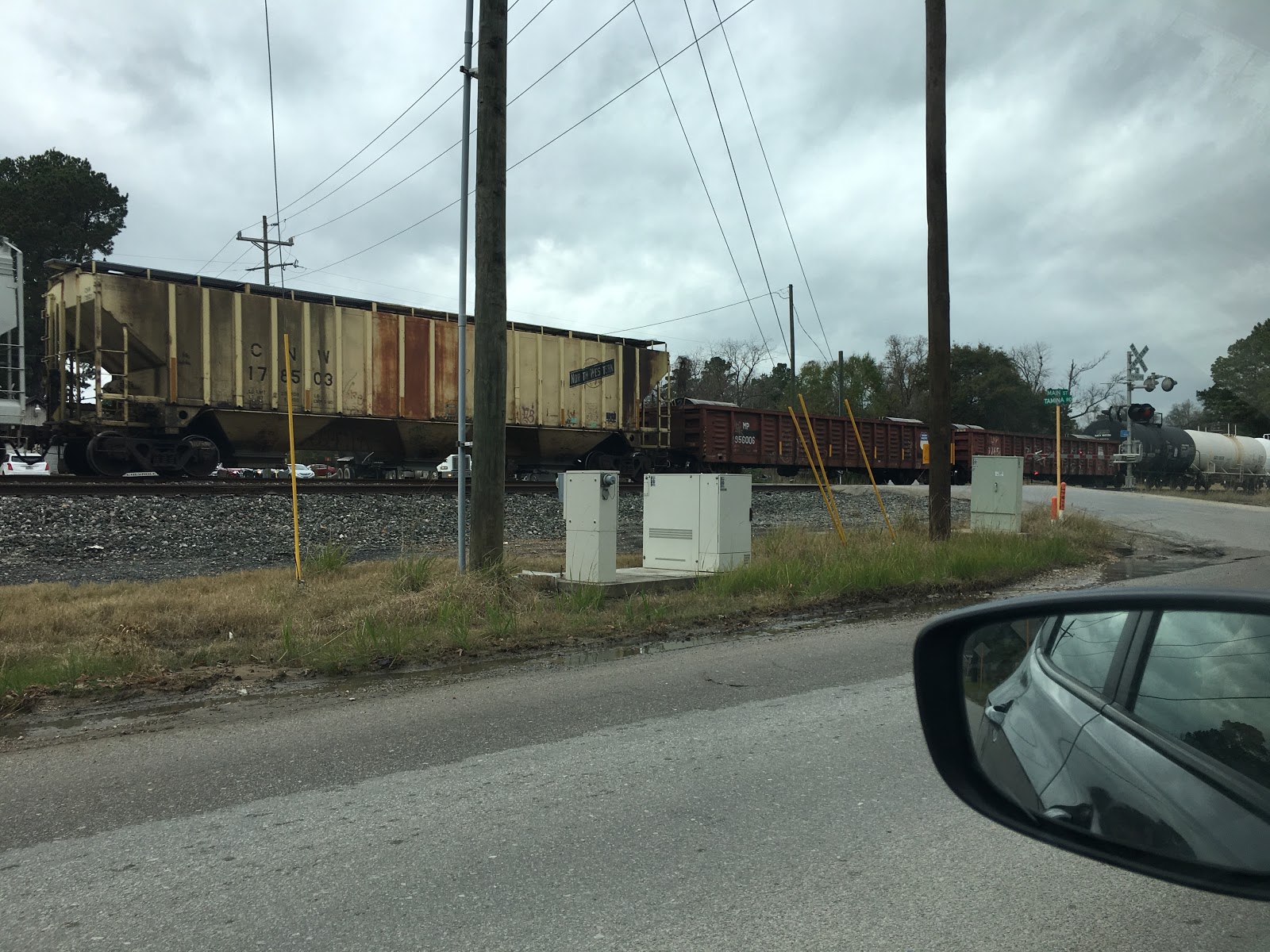 One of two ways into Tamina, TX—literally across the railroad tracks. Residents had to ask repeatedly for a stop sign at this intersection. 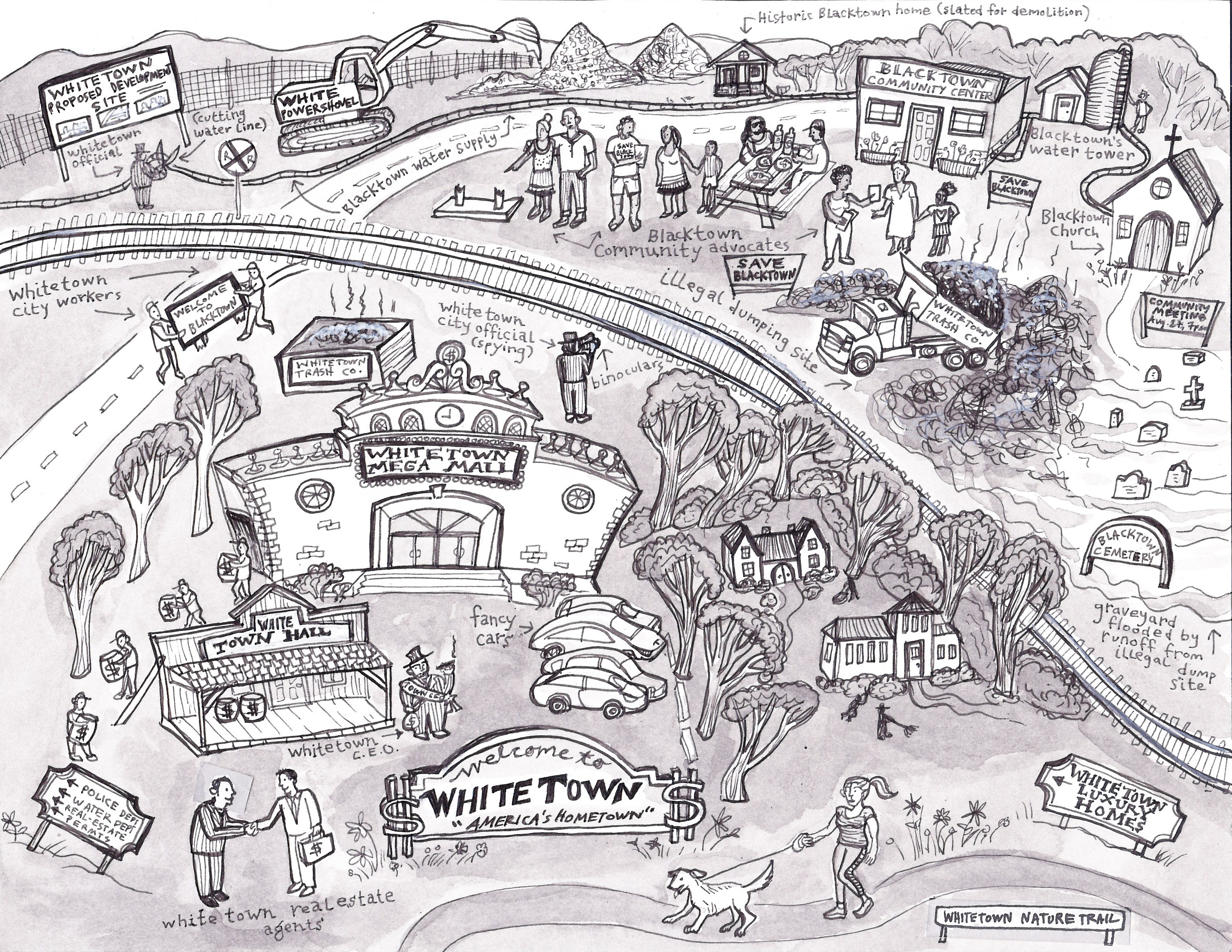 What is environmental racism for?
Creative Extraction: Black Towns in White Space