Public Works and Private Interest in Architectural and Engineering Services, 2000–2020

Architects’ fame does not necessarily correlate with their power. In fact, the opposite has tended to be true. Distributed across anonymous joint ventures, tangled bureaucracies, and vested interests, uncounted designers and producers of the built environment in the United States and beyond its borders constitute a formidable system of private interest. Thanks to its inscrutability, this system has an enormous impact, reproducing and reinforcing manifold injustices even as its most visible, if increasingly limited, public manifestations remain subject to democratic checks and balances.

What does architecture look like when studied through this system? Considering the increasing number of climate-related disasters requiring federally funded mitigation and response efforts, long-stalled infrastructure proposals, and heated debates about a "Green New Deal," “Green Stimulus,” or even “Green Reconstruction,” what does this system reveal about the built environment's relationship to today's interconnected crises of mutual care, racial oppression, and climate? And what part do architects truly play?

Systems hide. Accordingly, these questions are not easy to answer. This downloadable resource for students, teachers, and professionals in the arts and sciences of the built environment — available for download here, to the right, and on Instagram at @a_and_e_system — offers a provisional portrait of the A&E System. This system’s power is well established and diffuse, which makes it both important and difficult to understand.

The study focuses on public commissions, with the relationship between the “who” of federal procurement and the “what” of architecture in mind. By highlighting specific actors — identified as regulators, managers, stakeholders, and stewards — four chapters foreground the agency and responsibility of individuals and institutions in shaping the built environment. A web of public-private partnerships, the A&E System is complex, as are the built forms it generates. Nonetheless, it remains the responsibility of architects and other professionals of the built environment to understand how this system works.

Educational and professional institutions supporting the A&E System, however, have tended to shy away from this critical task in favor of more narrow understandings of the disciplines that shape the built environment and of their agency. Some aspects of the system, which stretches from small, locally-focused firms to those engaged in massive, multinational projects, will therefore be recognizable to readers, while others might seem less familiar, or perhaps even unrelated. This document simply sketches its most visible contours by stitching together publicly available federal procurement data, corporate websites, and advertisements. The first step toward systemic change is recognizing the system. 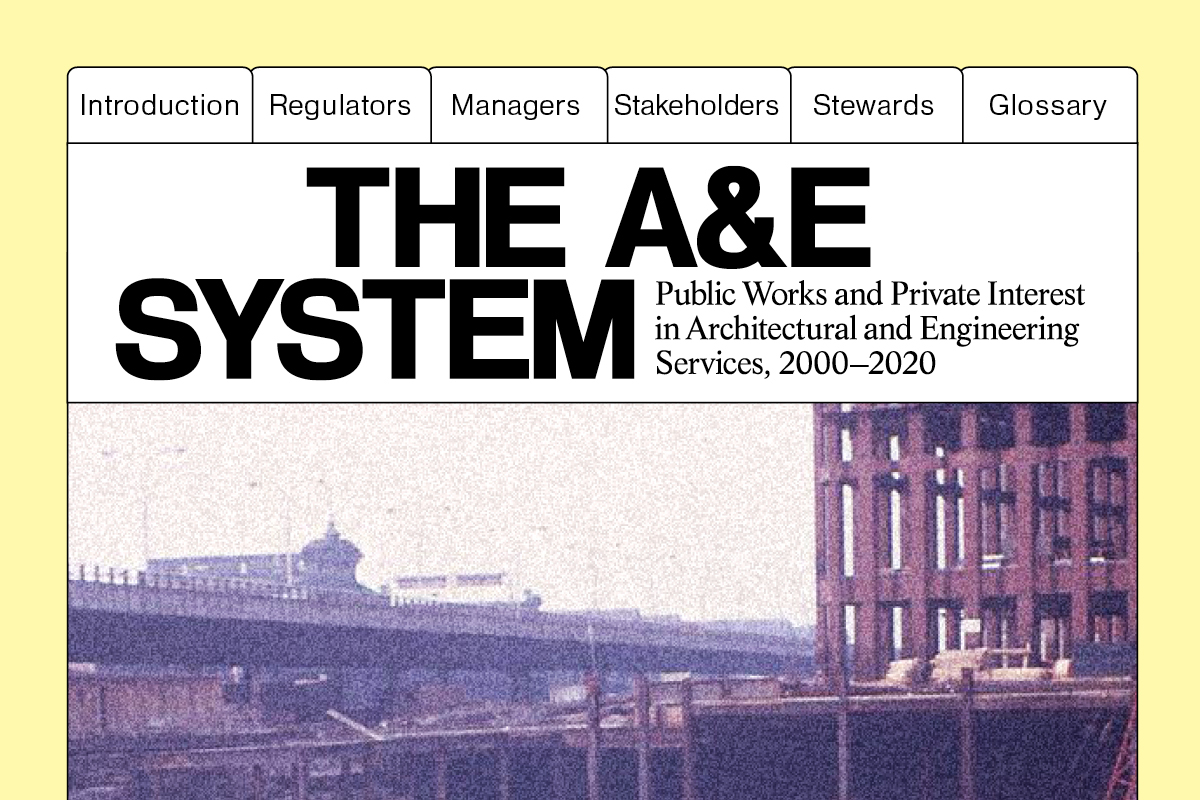 Green New Deal
#GreenStimulus and Beyond: A Resource
Green Reconstruction

Democracy in Retreat? Master Planning in a Warming World
Unnatural Disaster: Infrastructure in Puerto Rico before, during, and after Hurricane Maria
Green Reconstruction Curricular Workshop
Public Works for a Green New Deal